Is the inductive effect always measured relative to hydrogen?

"In Chemistry and Physics, the inductive effect is an experimentally observable effect of the transmission of charge through a chain of atoms in a molecule, resulting in a permanent dipole in a bond."

Recently, I learned from a teacher that the inductive effect of any atom/group is always measured with respect to hydrogen.

Under this definition, we would ideally attach the atom/group with an atom of hydrogen and observe the direction of the dipole moment caused by the difference in electronegativity between hydrogen and the atom/group in question. If the electrons-initially positioned at the middle of the bond-are pushed toward hydrogen, the atom/group is termed as a "$+I$", electron-donating group. On the other hand, if the electrons are pulled toward the atom/group, it is termed as a "$-I$", electron-withdrawing group. Thereafter, this atom/group will always exhibit this type of inductive effect. Even if a situation does arise, in which it appears as though an atom/group that exhibits the $-I$ effect with hydrogen is exhibiting the $+I$ effect with another atom/group, this must be the cause of other dominating effects such as the mesomeric effect and in those cases also, it is said that the atom exhibits the $-I$ and not the $+I$ effect.

To illustrate the clear distinction between the definition put forward by the teacher and the one on Wikipedia, let us consider a molecule of $\ce{Cl2}$.

Under the definition on Wikipedia, it is clear that $\ce{Cl2}$ is a non-polar molecule (i.e. No permanent dipole moment has been experimentally observed in this molecule). Hence, no inductive effect is in play and neither of the two $\ce{Cl}$ atoms show either the $+I$ or $-I$ effect.

On the other hand, if we work with the definition put forward by the teacher, we observe that an atom of $\ce{Cl}$ exhibits the $-I$ effect when attached to an atom of hydrogen, being more electronegative than it. Therefore, in the $\ce{Cl2}$ molecule, no permanent dipole exists as a result of the $-I$ effect of both chlorine atoms cancelling away from opposite directions.

It appears that only one of these two definitions is definitely correct and I am confused as to which one that is.

Your definition is falling apart because you are over-applying it. In the definition, you can see that it says:

...transmission of charge through a chain of atoms in a molecule...

It doesn't make sense to apply this in the case of a two-atom molecule, because the inductive effect is used to measure how one bond effects the electron density of other bonds in the molecule. You can assign any bond a dipole moment, but inductive effects are used specifically to explain phenomena observed in organic chemistry, where chains of molecules are (exceedingly) common.

To answer your other question: yes, inductive effects are always measured relative to hydrogen. Linear free-energy relationships are a quantifiable way of measuring a reaction's sensitivity with respect to a certain parameter. The Hammett equation is used to study how sensitive a molecule is in a given reaction to a change in its subsituent's inductive and resonance effects, for which the reference subsituent in all cases is a hydrogen atom. This is perhaps because the $\ce{C-H}$ is the most common bond in all of organic chemistry.

Linear free-energy relationships are particularly useful because similar as to what you said, substituent groups will always have the same relative inductive effects no matter the molecule. A quaternary ammonium group will always have a larger $-I$ effect (and larger $\sigma$ value) than a nitro group than a trifluoromethyl group. A molecule's response to these changes can give great mechanistic insight into organic reactions and the pathways through which they proceed.

A table of the different types of Hammett relations$^{[1]}$: 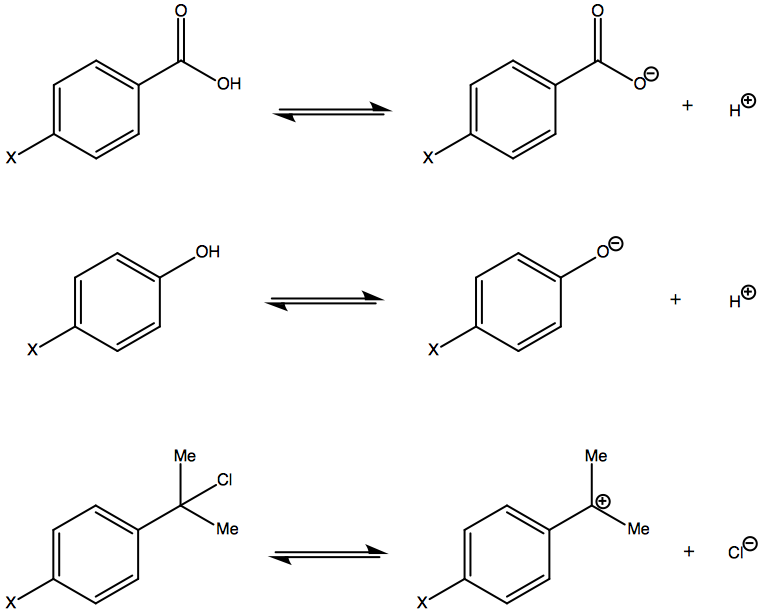 I myself am having a little bit of trouble wrapping my head around the Wikipedia definition which they cite from an organic chemistry textbook. I am specifically troubled by the phrase ‘resulting in a permanent dipole moment.’ According to all definitions of the inductive effect I know, a methyl group is electron-donating ($+I$). Yet, if you consider para-xylene, the molecule suddenly has a centre of inversion (point group $C_\mathrm{2h}$). Therefore, there is no permanent dipole in para-xylene. (Depending on the methyl rotamers, it might also have $C_\mathrm{2v}$, in which case the dipole would be perpendicular to the benzene ring plane — and since there is almost no vertical structure, ignoring the three aliphatic $\ce{C-H}$ bonds, it is predicted to be very small.)

There is no reason to assume that methyl groups suddenly lose their $+I$ effect just because two of them are bonded to two different sides of a benzene ring. The NMR supports the assignment of a double $+I$-substitution with the aromatic protons of para-xylene displaying chemical shifts of $7.05~\mathrm{ppm}$ (compared to $7.36~\mathrm{ppm}$ in benzene; same solvent $\ce{CDCl3}$). Obviously there is additional shielding present in spite of no observable permanent dipole, which can only be attributed to the methyl groups’ $+I$ effect. The same case can be made for other symmetrically para-substituted benzenes such as para-nitrobenzene ($8.41~\mathrm{ppm}$ in $\ce{C6D12 + C3D6O}$), para-dichlorobenzene ($7.26~\mathrm{ppm}$ in $\ce{CDCl3}$) and others. In these cases, especially dichlorobenzene, the point group is actually predicted to strictly be $D_\mathrm{2h}$ — strictly containing inversion.

Thus, when having to choose between your teacher’s and Wikipedia’s definions, I want to go with your teacher’s because it better explains what we discuss in basically every seminar.

The electron pairs shared between carbon atoms in a carbon chain enjoy a certain excess of electron charge from C-H sigma bonded MOs . Now the other atom or groups influence on this excess share can be either strengthening or weakening the electron cloud density on carbon chain. All +I GROUPS INCREASE SUCH DENSITY to a considerable extent on immediately bonded fellow to stranger , which dissipates rapidly as you go farther in carbon chain. Similarly - I groups have opposite effect.

Hope i conveyed the idea !