I found transition states (TS), but calculations aren't supported by experiment. Do I look for more TSs or somewhere else?

There was no benzosultam yield when either of the other two analogues (R = neopentyl, NeoP, and R = trimethylsilyl, SiMe_3) were reacted with N_3Trisyl under the same conditions. I hypothesized that differences in activation energies for the C-N bond forming reaction were the root of the observed reactivity differences.

I used Gaussian to optimize structures of the transition states, reactants and products for each of the three analogues. From my results, I calculated activation energies for the C-N bond forming reaction for each analogue, as well as standard reaction enthalpies, entropies, and free energies. I calculated activation energies in the range of ~6-22 kJ/mol, with R = Ph being the lowest, as well as negative free energies of reaction, and favorable entropies and enthalpies of reaction for every analogue. These results suggested that some benzosultam should have been observed for the R = NeoP and SiMe_3 analogues.

So now I'm stuck. The reaction should be spontaneous at every temperature, according to my calculations. But it isn't.

Now I think I'm looking in the wrong place.

Maybe I want to look for intermediates and a second transition state?

I'd assumed the energy diagram for the reaction looked like this 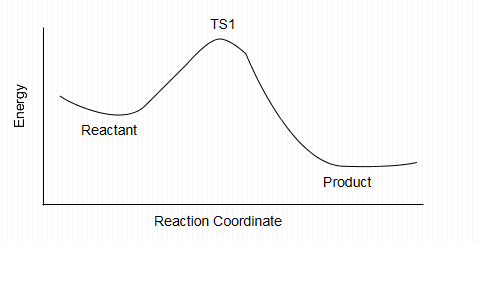 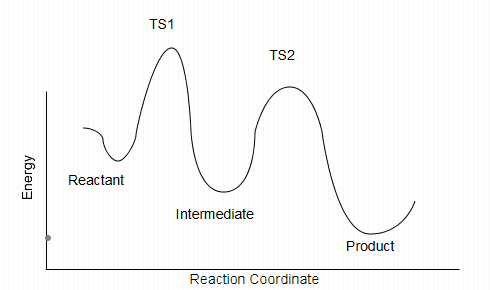 . Meaning I could have calculated TS2 (in the second diagram) for each analogue, and ignored TS1, I'd have been looking at the wrong reaction step.

There's also a possibility my method is inadequate.

Or maybe I'm calculating energies using reactant and product structures which are at local, but not absolute, minima.

TL;DR: Thermodynamic properties that I have calculated for a catalytic bond forming reaction are not supported by experimental results. So, now I have the choice of revising my hypothesis and searching for another set of transition states and some intermediates, or searching the energy surface around my reactants and products for lower energy conformations. Do these choices sound reasonable given the data and evidence I've collected? Am I overlooking something? What to do?

28
Suggest methods and basis sets for a variety of systems
1
How to calculate a reaction's DeltaH using a MM forcefield calculator software?
19
How to evaluate the heat of formation with computational chemistry?
4
Can the number of intermediates for a reaction be more than the total number of transition states?
6
What types of energies can be determined by molecular dynamics in gas phase or explicit solvents?
6
Is there a rule of thumb to predict when coupled cluster might dip below the variational limit?
6
Ab initio method to calculate C-C bond dissociation energy?