I know that a molecule is more stable when a free radical is on a secondary carbon over a primary carbon, but how about when there is a lone pair of elections that can be placed on a secondary or primary? Is there any difference in the stability of the molecule or does that only apply to free radicals?

I am not sure if you are referring to carbanions or carbenes (I suspect the latter), because both contain a carbon with a lone pair, so I will give explanations on both in the following.

Carbanions are destabilized by the exact same effect that stabilizes carbocations and radicals: hyperconjugation. Donation of electron density from an adjacent $\sigma$ bond into the empty/half-filled $p_z$ orbital stabilizes the cation/radical, but not a carbanion center with its negative charge in the fully-filled $sp^3$ orbital lobe. Therefore, a primary carbanion is more stable than a secondary one.

The inverse is true for carbenes: Secondary carbenes are way more stable than primary ones. This is because carbenes are per se a very reactive species, and because of this property they are often used in organic synthesis as intermediates which are generated in situ. To obtain a reasonably stable carbene, the reactivity of the lone pair needs to be somewhat reduced. Two substituents at the carbene carbon are needed which stabilize the carbene either by steric hindrance (i.e. making the lone pair difficult to reach for other reactants) or mesomeric effects (for example, lone pair donors which alleviate electron lack of the "sextet" carbon, delocalization of the carbene lone pair into an aromatic system). The Arduengo carbene (named after its discoverer) is a good example for this. The stability of this compound is such that it can be isolated as a crystalline solid at room temperature. The carbene lone pair can be delocalized into the five-membered ring which then contains 6 $\pi$ electrons (2 double bonds + lone pair of uncharged nitrogen) and is aromatic. Bulky $\mathrm{R}^1$ groups like adamantyl further contribute to stability by shielding the lone pair from potential reactants (source). 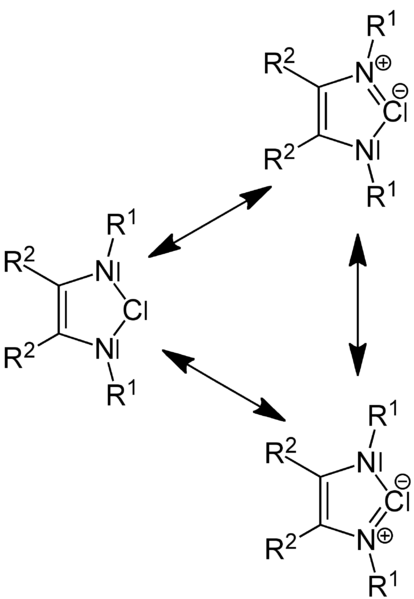 Arduengo carbenes are not the only persistent (especially stable) carbenes, and the understanding of their stability is still a subject of ongoing research, because structural elements (bulky substituents, aromaticity) which had been regarded as necessary for stability were often disproved as such by the synthesis of carbenes which did not contain them. The compounds do not need to be cyclic, as shown by bis(diisopropylamino) carbene, and even heteroatoms next to the carbene center do not need to be present, like in the case of bis(diisopropylamino)cyclopropenylidene.

Yes, there is a difference. You should look into "carbene" stability: http://en.wikipedia.org/wiki/Carbene

A secondary carbene will be more stable.

Not the answer you're looking for? Browse other questions tagged organic-chemistry electronic-configuration stability or ask your own question.

4
Why are tertiary alkyl halides obtained in higher yield than secondary or primary during free radical halogenation of alkanes?
5
Why is only one lone pair in imidazole delocalised?
7
Why is O2 a biradical?
11
Steric effects of a lone pair and piperidine
8
Comparison of rate of dehydration of primary, secondary & tertiary alcohols on cyclohexane
5
3-step process to make propyl ethanoate from propene
7
Rate of reaction of silver salts of carboxylic acids having different alkyl groups towards Hunsdiecker Reaction
1
Alkane free radical halogenation