How do amino acids look like at the isoelectric point?

At the isoelectric point amino-acids are neutral to the outside. It is however not known to my knowledge if the molecules are indeed in a zwitterionic form or just in its "normal" totally uncharged form, i.e. the dissociation constant for this reaction:

is not known. Does anyone know how they actually look like? What form is more probable, how realistic is the zwitterionic form?

Edit: I did a test calculation for cysteine with DFT, using a PBE functional and implicit water and found that the zwitterionic form is about 7 kcal/mol more stable, which would rather strongly indicate that the zwitterionic form is indeed dominating a lot and you would not at all find the structure on the left as the bars from wikipedia indicate (supposing that I found low lying minima in both calculations and not only local ones). Are there some other studies proving this?

Edit2: Ok the zwitterionic form is definitely more stable, that one can somehow reason from chemical knowledge or pKa's. But how much more stable, can one somehow get a dissociation constant for the reaction above?

Edit4: To clear up my question even a bit more, here is a diagram: 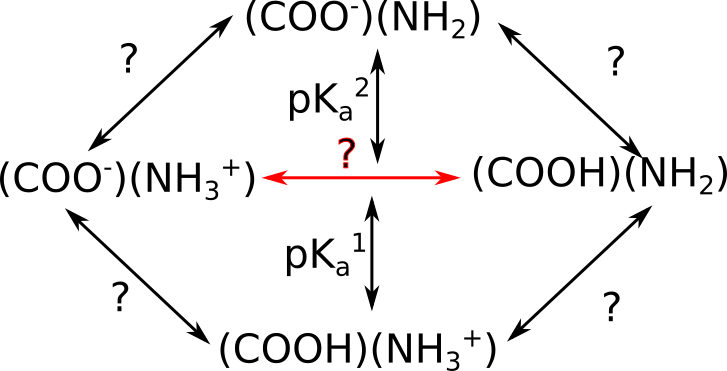 The red arrow and question mark is what I want to know about. The pks1 and pks2 are known, that was clear to me, but how to get any information about the equilibrium in the middle?

While the other answers are undoubtedly correct with respect to water, the better answer is that it depends on your solvent.

The zwitterionic form is the one preferred in solid state and in solutions where the solvent can accomodate charges well, i.e. polar solvents. In less polar solvents, the neutral form can predominate to allow dissolution (rise in entropy) in spite of non-dissociation (not as favourable). However, cyclic hydrogen bonds are to be expected.

But in the end, this complicated discussion boils back down to what the other answers have said again. The only difference when changing solvent is that the $K_\mathrm{a}$ equation becomes different. Water is no longer the co-acting principle, it is a different solvent resulting in different $\mathrm{p}K_\mathrm{a}$ values (which are solvent-dependent to a certain degree).

By Henderson relation we have

If you want then to know the exact proportion you need to know the concentration of your amino-acid.

This is totally known based on the pKa values of the carboxylic acid and the ammonium. The zwitterion is the predominant form.

Not the answer you're looking for? Browse other questions tagged amino-acids or ask your own question.