Can rearrangement in carbocations cause inversion?

Can rearrangement reactions in carbocations cause inversion?

If you have a carbocation rearrangement (i.e. a methyl shift or a hydride shift), is it possible for inversion of stereo chemistry to take place?

Originally this was a comment, but I figure it's good enough for an answer.

As far as I can tell, you seem to be confusing the notion of suprafacial/antarafacial with retention/inversion.

You're asking whether the migrating group can loop around to the other side of the carbocation, right? That's known as an antarafacial process, not an inversion. 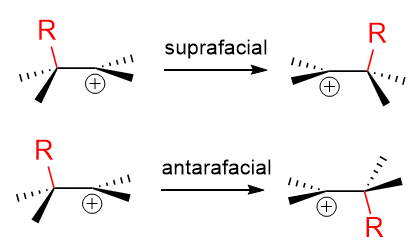 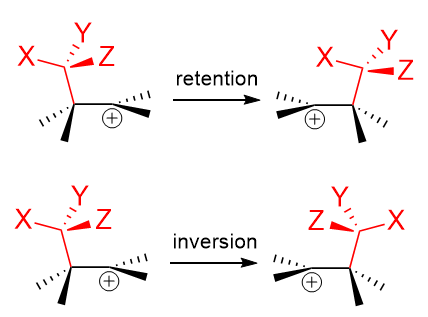 In any case, the crux of the matter is that this migration is a concerted process (it occurs in one step), and an antarafacial migration cannot occur due to geometric reasons. The lobe of the p orbital on the other side is way too far away, and the $\ce{C-R}$ $\sigma$ orbital (which contains the electrons that you are trying to migrate) is not going to be able to reach it.

[1,2]-alkyl (or hydride) shifts are always going to be suprafacial!

(As a side note, the suprafacial [1,2] shift has to proceed with retention, as per Woodward-Hoffmann rules.)

The Woodward-Hoffman rules are central to this discussion, and succinctly put concern themselves with the conservation of orbital symmetry. Conservation of orbital symmetry requires the transformation of the molecular orbitals of reactants into those of products to proceed continuously by following a reaction path along which the symmetry of these orbitals remains unchanged.

First, a note about notations. In a sigmatropic rearrangement are concisely described by an order term [i,j], which is defined as the migration of a $\sigma$-bond adjacent to one or more $\pi$ systems to a new position (i−1) and (j−1) atoms removed from the original location of the $\sigma$-bond. When the sum of i and j is an even number, this is an indication of the involvement of a neutral, all C atom chain.

Now, given below is a visual summary of how a suprafarcial and an antarafarcial process takes place.

Now, let's look at it the Wagner-Meerwein rearrangement i.e a 1,2-migration of an alkyl or aryl residue to a carbocation center. It represents the most simple and smallest system in which a sigmatropic rearrangement can take place.

Now if this reaction is to take place with stereochemical retention, the migrating group has to translate, (without rotation), into the new bonding position. The image given below illustrates this process.

Now turns out conservation of orbital symmetry in the transition state, demands that the process take place this way.

Imagine, if the migrating group were to rotate, we will have inversion (however, we can't form a new bond because the symmetry requirement is violated).