What makes a good antioxidant?

I am doing a school project on antioxidants and I would like to find out what makes a good antioxidant. I know examples of antioxidants such as Vitamin A, C and E but I was wondering what commonality exists between them in terms of chemical structure and bonding.

I am a novice in chemistry so a simple but informative answer would be appreciated (little to know nomenclature).

Antioxidants are molecules that help pair up electrons in the cell.

The way I see it, antioxidation in the body is all about getting electrons to pair up. dioxygen, $\ce{O2}$ is a molecule with an overall even number of electrons (12), but the two highest energy electrons are in different molecular orbitals, so it is actually a diradical. Species with unpaired electrons, like ground state oxygen, cannot react with the body's even electron count organic molecules. This is why the body must employ metals, which have unpaired electrons in order to reduce oxygen to water to form cellular energy in the mitochondria. On its way to being reduced to water, oxygen can form reactive species which can react with organic biomolecules, like $\ce{O2-}$, $\ce{HO-OH}$, and $\ce{HO.}$ These are known as Reactive Oxygen Species (ROS).

ROS cause oxidative stress, which is a process that damages important biomolecules like lipids and nucleic acids through oxidation. Unstable ROS like peroxides can initiate radical chain reactions, leading to oxidation of important molecules in the cell. Two good examples of ROS damage are lipid peroxidation, which damages the cellular membrane and nucleobase oxidation, which leads to DNA damage. I will show mechanistic examples for both: 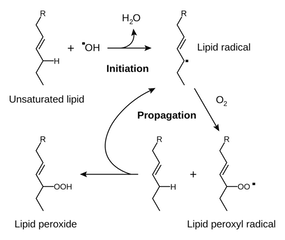 This creates a hydrogen bonding situation where guanine can match with adenine instead of cysteine: 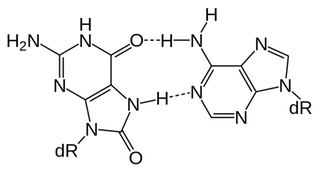 This is an example of base pair mismatch, a common form of DNA damage, potentially leading to genetic mutations.

Because of these possibilities, it is very important for the body to have safety mechanisms to protect itself against these (and other) forms of oxidative damage. There will always be some concentration of ROS in the body's cells, but the body's anti-oxidation systems should help minimize this.

"Antioxidant" is a broad class of chemicals, including both small molecules and peptides. The general idea is that they are molecules that prevent or reverse oxidation of important biomolecules, or that terminate radical chain reactions. In the lipid peroxidation reaction shown above, the final step is propagation of the radical chain reaction. Since radicals always form new radicals when reacting with non-radicals, the chain reaction will only terminate in one of two ways: either the ROS concentration gets soo high that two radicals bind (very bad), or an antioxidant like vitamin E or Vitamin C will "quench" the chain reaction. Vitamin E will "scavenge" ROS in a process coupled with reduction by ascorbate (vitamin C anion): 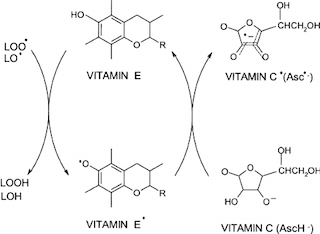 Since vitamin E is fat soluble, it can help to protect the lipid bilayer. The semidehydroascorbyl radical that's produced is fairly stable, with a half-life of $10^-5$ s. Now, we have a less reactive radical. Processes like this are known as radical "quenching". two molecules of semidehydroascorbyl radical will quickly disproportionate to dehydroascorbate and ascorbate. This is a process where two odd numbers of electrons turn into two even numbers. 1 + 1 -> 0 + 2

Another sort of antioxidant is the sort that dimerizes. Because one electron needs to be donated to each radical to form a non-radical, one way of removing them is to convert two radicals and two non-radicals into three non-radicals. This is a process where two odd and two even numbers of electrons turn into three even numbers. 1 + 1 + 2 + 2 -> 2 + 2 + 2

Glutathione is probably the most important antioxidant in the body's anti-ROS arsenal. Glutathione can convert a molecule of of $\ce{HO-OH}$ to water in a processes catalyzed by the enzyme glutathione peroxidase. A peroxide is not a radical, but it's a high energy ROS which can easily form two $\ce{HO.}$. The overall equation for the reaction is as follows:

Depending on your level of knowledge of chemistry and biochemistry, some of the specifics here may be difficult to understand, but the key is simple: The commonality between all antioxidants is that they are able to convert odd numbers of electrons into even numbers of electrons in processes like these: 1 + 1 -> 0 + 2 or 1 + 1 + 2 + 2 -> 2 + 2 + 2 and probably many others.

Antioxidants are just molecules that help pair up electrons.

ROS comes into play mostly as exhaust from the mitochondria, the location where oxygen is turned into water. Antioxidants take care of it, and many of them are regulated through the action of glutathione, which is dimerized on oxidation, then split apart again during enzymatic reduction (along with the cofactor NADPH). Through a system of enzymes and coupled reactions, the body tries to maintain a low ROS concentration.

3
What makes sulfur-containing compounds such good antioxidants?
4
What is the formula for migration rate of DNA in agarose gel electrophoresis?
3
Storage of Urine
3
Create combinatorial library of biologically plausible chemical compounds based on library of known compounds
6
Why is vitamin C called an antioxidant?
3
Why is partial pressure used as a metric for oxygen in blood?