Why would this rearrangement happen?

So, I am a first year chemistry student and I saw this chemistry reaction on a previous year's test. I attempted to figure out the mechanism, but I'm rather confused as to how the cyclopentane somehow donates a carbon to the cyclobutane? Why would such a rearrangement occur? 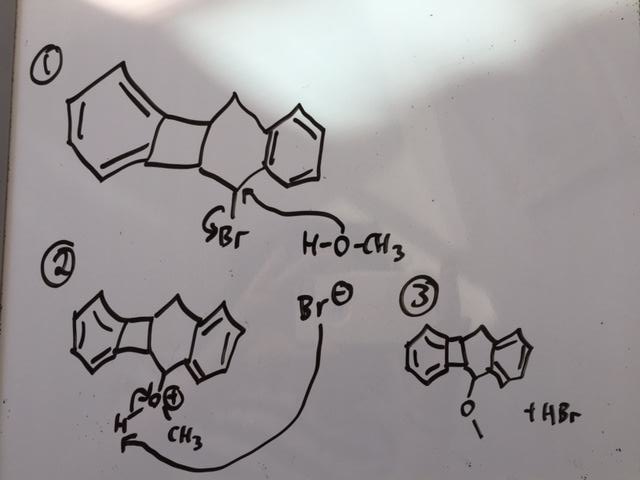 That is how far I get to before I am lost. Is methanol even a strong enough reagent for such a reaction?

organic-chemistry reaction-mechanism halides
Share
Improve this question
edited May 15 '17 at 19:08

Is methanol even a strong enough reagent for such a reaction?

So, you go through a carbocation intermediate, which undergoes an alkyl shift to generate a more stable carbocation.

Both carbocations are benzylic and secondary, so hyperconjugation isn't the driving force for the rearrangement, as your comment hints at. Instead, it's simply related to the relief of ring strain as you expand a four-membered ring to a five-membered ring. Four-membered rings are pretty unstable to begin with and fusing one to a benzene ring increases the strain even further since you impose more geometrical constraints on the ring.

Interception by methanol and deprotonation gives the desired product.

Not the answer you're looking for? Browse other questions tagged organic-chemistry reaction-mechanism halides or ask your own question.

3
How much lactose is there in milk (mechanism)?
65
How do organic chemistry mechanisms become accepted?
5
Why does alkyl rearrangement happen in the Hofmann rearrangement?
19
In what way could benzoin give Tollen's test?
13
Rearrangement with sodium iodide (ring opening)
0
Is 1,3 alkyl shift allowed in Cyclobutyldicyclopropylmethyl Cation?
8
Why does a proton prefer to attack a double bond instead of protonating an alcohol in a reaction of unsaturated alcohol with sulphuric acid?