There seems to be some correlation with atomic number, although three points hardly make a trend. Is there an explanation for this? I'm not interested in the exact numbers, but rather the relative orders of magnitude.

The are a number of important factors that contribute to the shielding of a nucleus. Chemical shifts arise due to differences in the local magnetic field in the different environments within a molecule, driven by overall electron density about that nucleus. That is to say, the effective magnetic field experienced by a nucleus is a function of the shielding constant, σ. There are a number of components of σ.

The two most important factors for the chemical shift range are the diamagnetic and paramagnetic contribution. All other contributions are quite small and operate within the effects of these fist two.

The diamagnetic contribution comes predominantly from electrons in the s-orbital; for most nuclei this is almost constant for all arrangements. Its effect diminishes with increasing distance from the nucleus, which is why s-orbitals play a more important role than p-orbitals. Only for those nuclei that have their outer orbitals as s-orbitals ($\ce{^1H, ^2H, ^7Li, ^{23}Na}$ for example) will the diamagnetic contribution be the dominant contributing factor, and this effect is generally small, providing only modest chemical shift ranges of up to tens of ppm.

The paramagnetic contribution is the dominating factor for all nuclei that have electrons in outer shell p, d and f orbitals. Paramagnetic shielding comes from the imbalance of electron density of the valence electrons in the outer orbitals. The way I get my brain around this is by thinking that the larger the non-spherical orbitals, the harder it is to get uniform distribution. The effect of paramagnetic contribution is large; up to many thousands of ppm.

I only want to add some data and quotes to supplement long's answer. I am also indebted to long since the reference he provided was what helped me to find these pieces of information.

As already mentioned in long's answer, the chemical shift $\sigma$ arises from several components. Chief amongst them are the (local) diamagnetic term $\sigma_\mathrm d$ and the (local) paramagnetic term $\sigma_\mathrm p$. The diamagnetic shielding is generally proportional to charge density and is given by the Lamb formula. The paramagnetic shielding is generally proportional to $\left<r^{-3}\right>$ (the expectation value of $r^{-3}$ for valence p or d electrons) and is inversely proportional to $\Delta E$, which is an averaged electronic excitation energy. The origins of these terms and formulae to (approximately) evaluate them are discussed by Ramsey in a seminal paper.1 Due to several issues which made the terms difficult to calculate, modifications to this model were made by adding several other terms.2–5 However, the subdivision still conceptually stands.

The remainder will just be quotes. Günther's NMR Spectroscopy states the trend:6

Existing experimental data show that chemical shift ranges tend to increase with the atomic number $Z$ across a given row of the Periodic Table and down a given group. As discussed earlier for carbon-13, the significant contribution to the shielding of heavier nuclei comes from the paramagnetic term, $\sigma_\mathrm p$, in the general equation for the shielding constant, $\sigma$.

More detailed discussion is to be found in older books, some of which are probably out of print. In NMR and the Periodic Table, edited by Harris and Mann, there is a lot of information.7

The much smaller ranges observed for $\ce{^7Li}$ and $\ce{^23Na}$, about 10 and 15 ppm respectively, imply that only $\sigma_\mathrm d$ is of importance for these nuclei, since $\sigma_\mathrm p$ requires the presence of p valence electrons.

Some of the heavier nuclei have very large chemical shift ranges; for example $\ce{^59Co}$ and $\ce{^205Tl}$ have ranges of about 12000 and 34000 ppm respectively. These undoubtedly reflect the greater polarisability of the higher p and d valence orbitals and their varied commitments to chemical bonding.

Multinuclear NMR, edited by Joan Mason, also has a wealth of information.8 A graph of the chemical shift ranges against $\left<a_0^3/r^3\right>$ is presented on p 61. I was too lazy to scan the book, so here's a photograph of it (which is actually pretty decent): 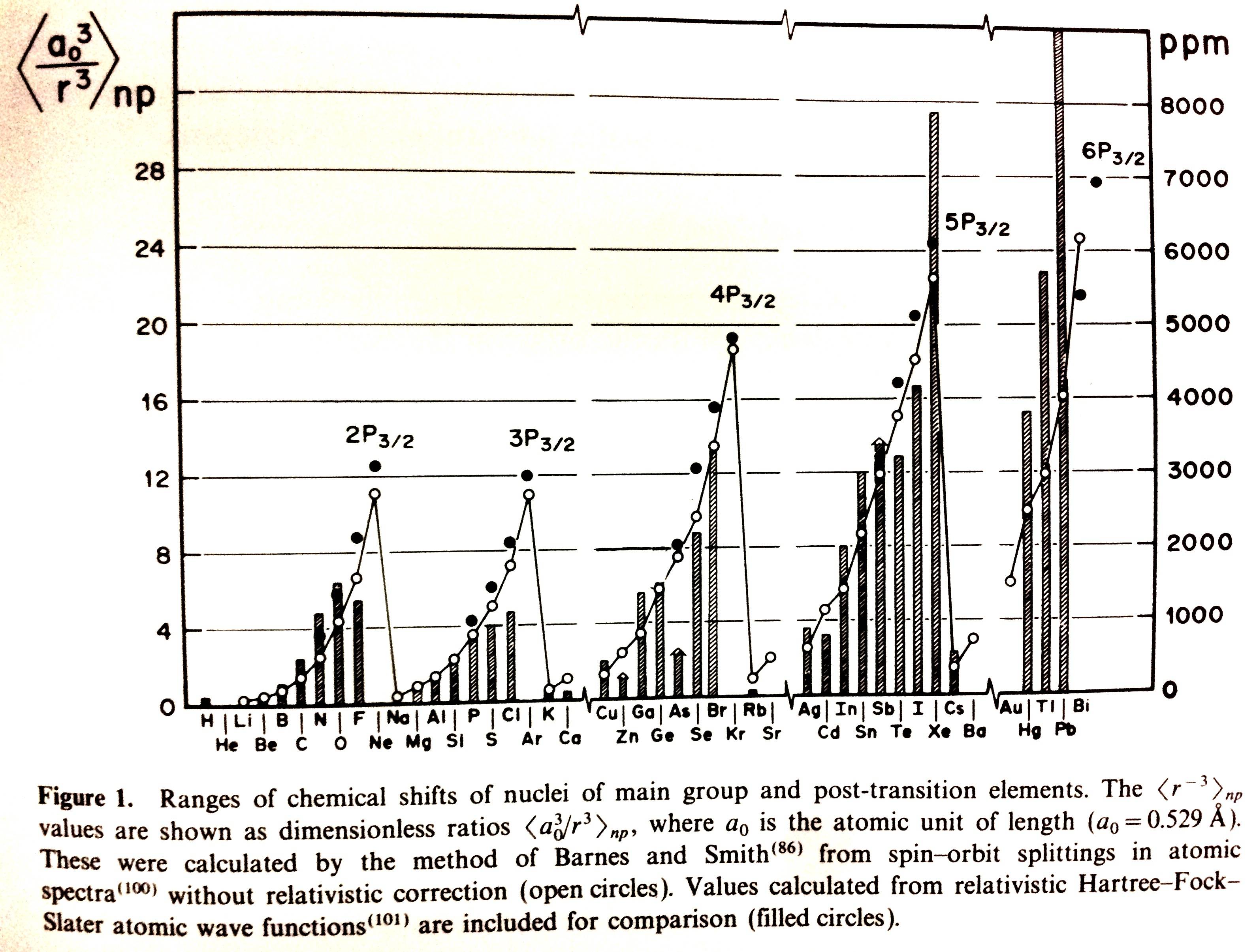 The periodic variation with atomic number of the ranges of chemical shifts observed for the nuclei of main-group and post-transition elements was pointed out in 1964 by Jameson and Gutowsky.9 The tendency of the ranges to increase across a given row of the Periodic Table, and down a given group, was compared with the similar variation of the radial term $\left<r^{-3}\right>$ for the valence p electrons in the free atom, since the paramagnetic shielding term $\sigma_\mathrm p$ has this radial dependence. Figure 1 shows the periodicity of the ranges as now known and the corresponding periodicity of $\left<r^{-3}\right>$ values. The relatively large shift ranges for the first row elements compared with heavier elements can be linked with well-known "first row anomalies" such as the readiness to form pπ bonds (C=O, C=C, N=N, etc.) and relatively high electronegativity.

One might rightly ask, "what is the physical basis for this?" The reason is that $\sigma_\mathrm d$ is a sum over all orbitals, and orbitals close to the nucleus contribute much more than orbitals distant from the nucleus; in particular, the 1s orbital is a very major contributor. However, since changes in diamagnetic shielding in molecules arise primarily due to the movement of valence electrons, the values of $\sigma_\mathrm d$ do not change much. This argument was already put forth extremely early, by Dickinson in 1950.10 $H'(0)/H$ in this paper is equal to what we now know as $\sigma_\mathrm d$. 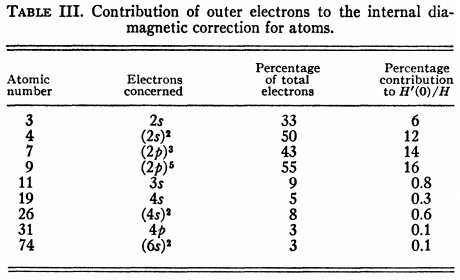 From Table III it is seen that the outer or valence electrons give a very small contribution to $H'(0)/H$. [...] Thus it would be expected, except perhaps for the lightest atoms, that molecular perturbations of the outer electrons would have little effect on $H'(0)/H$ [...] The observed shifts of nuclear resonances from one molecule to another are often as large as, or greater than, the entire atomic diamagnetic correction for the atom concerned. The diamagnetic field at the nucleus for both molecules would be closely the same and hence the shift must be attributed chiefly to a difference in the second-order paramagnetic field in the two molecules.

Not the answer you're looking for? Browse other questions tagged physical-chemistry atoms nmr-spectroscopy or ask your own question.

16
Correlation between 1H and 13C shifts - coincidence or not?
5
Why does the nitrile carbon experience more shielding than a carbonyl carbon in CNMR?
6
The carbon-13 chemical shift of acyl chlorides vs ketones
0
Why does sp2 hybridization result in a greater chemical shift in carbon NMR?