Is there no alternative mechanism for carbocation rearrangements rather than hydride shifts? I've been killing myself over this thing for over two days, and I do believe that hydride/alkyl shifts are not only unfavourable, but unnecessary as well.

What follows might be a little weird to comprehend at the first try, but please, stay with me here...

Let us deal with one of the simplest situations we can think of, say, 1-butanol in acidic medium.

The H+ ion will interact with the lone pair in oxygen and H2O goes out. Till here we are all in the same boat. Now comes the interesting part. 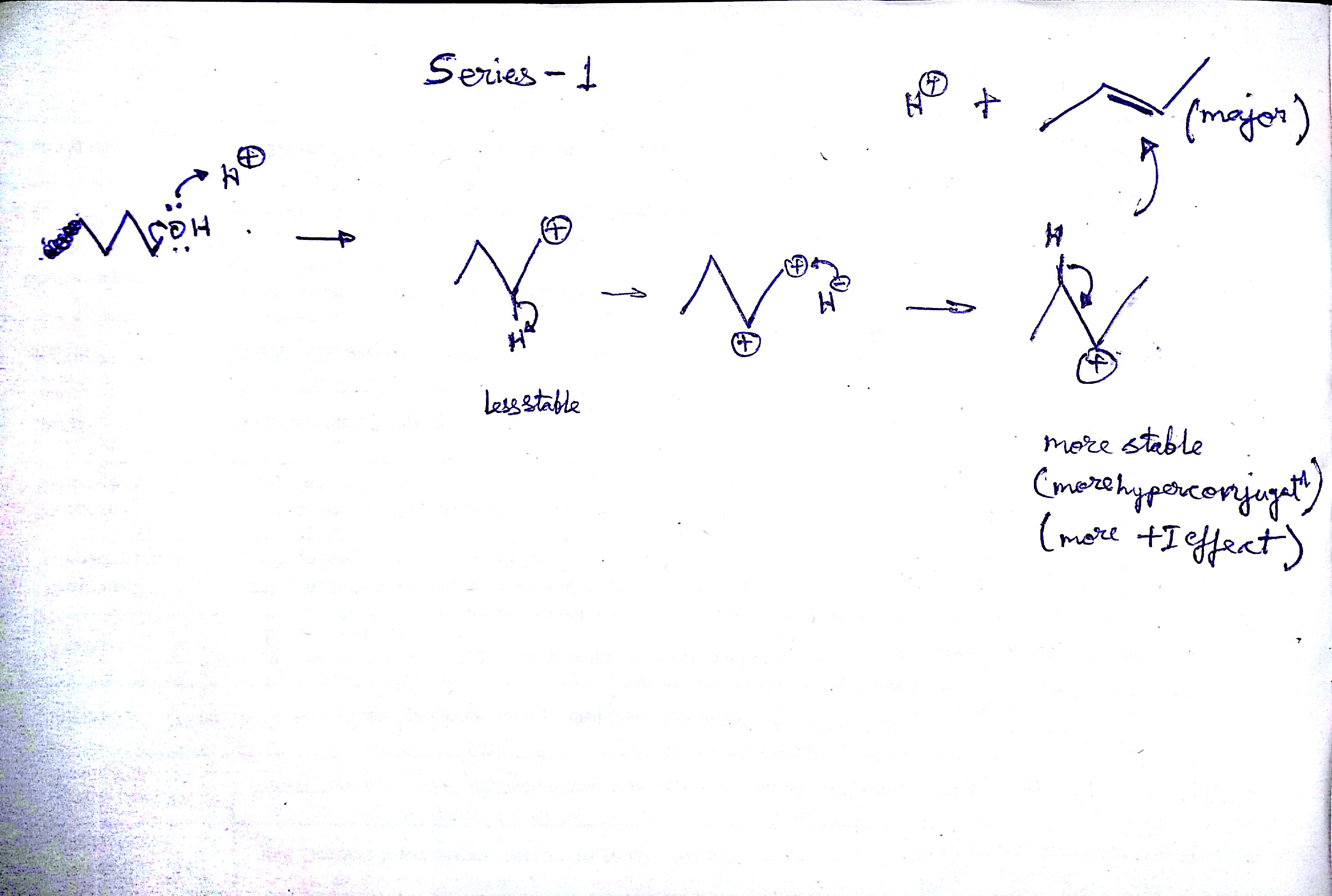 We're all familiar with the classical theory, so I shall not waste time discussing that mechanism (kindly refer to the enclosed series -1 if in doubt).

I shall only point out what seems, to me, a major flaw.

When the primary carbocation is formed, it causes a number of things to happen:

(1) The electronegativity of the carbon holding the positive charge increases drastically.

As it is, carbon has a higher electronegativity than hydrogen. now, you've gone and increased it even further. Now, when the carbon(2)-hydrogen bond is cleaved, what would one expect? One would expect that the electron pair is retained by the carbon and hydrogen goes out as H+. The classical theory suggests that the opposite of this is true. How, then is that kind of bond cleavage feasible?

I say that it is not. It is my strong conviction that nature, in fact, doesn't work that way. Let us look at an alternative mechanism to this kind of a reaction.

(I request all of you to kindly assist me in finding the flaws in what I shall put forth now, for if I can think of it, so can every other person on the planet, and it is impossible that some organic chemist didn't think of it before me. Since it has not been accepted, there HAS to be a flaw. What I think has been expressed in the enclosed Series-2.) 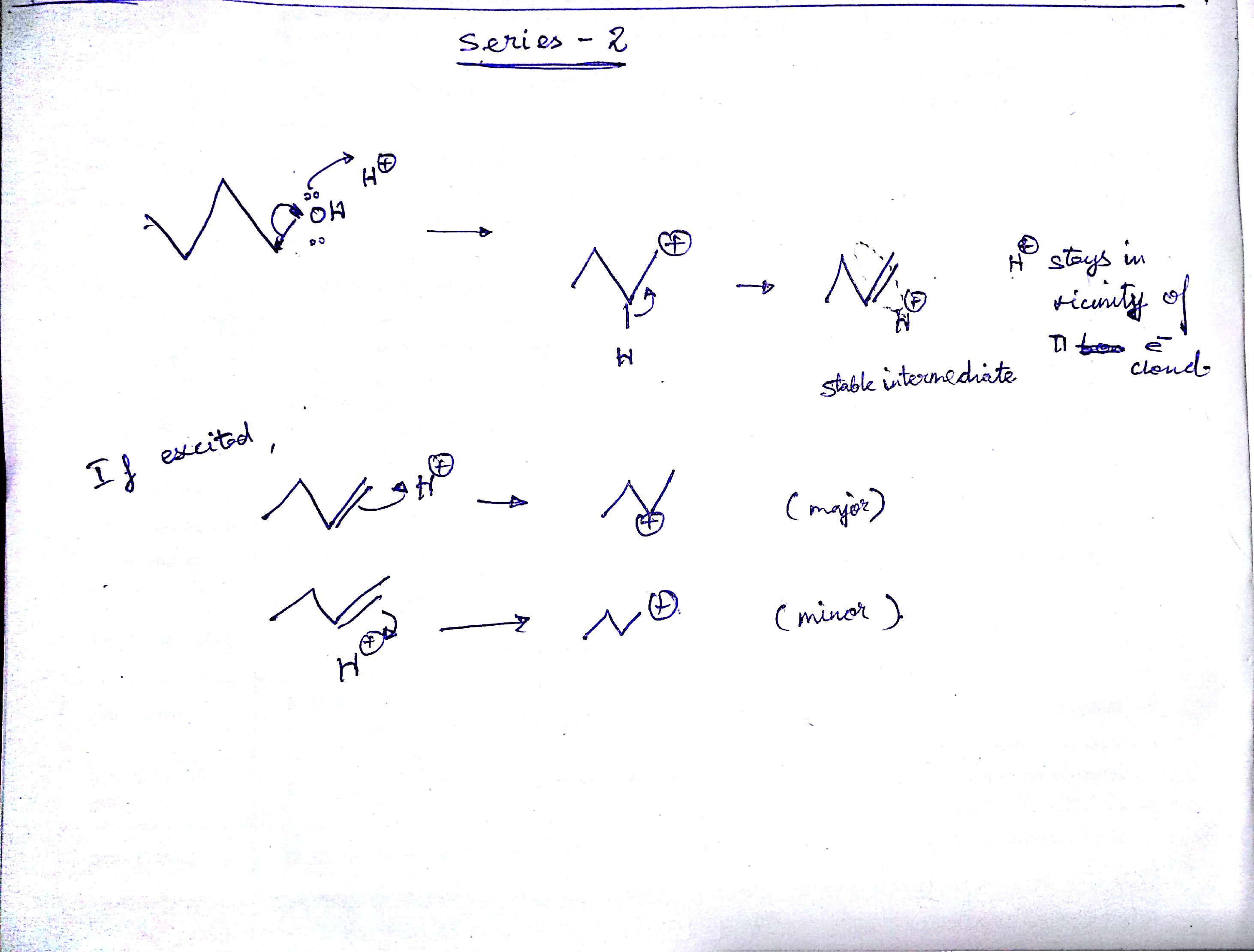 According to the alternate theory, the carbon(2)-hydrogen bond is cleaved as one would expect it to. A comparatively stable intermediate, namely 1-butene, is formed.

There is a comparatively higher electron density in the region of the pi bond. Hence, in absence of any other option, the proton stays in the vicinity of this pi bond, due to electrostatic force of attraction.

This system, when given enough energy(via collisions with other molecules), cleaves the pi bond and the electron pair, now retained by one of the carbons (most of the time with carbon(1) since a primary carbanion is much more stable than a secondary carbanion), is given to H+, thus giving you your desired secondary carbocation.

So... Is there any other theory as well? Is what I propose feasible? We can never know the absolute truth, of course, but how close are we to it?

PostScript: I am very much aware that what I state is not something new. It must have crossed many other minds before mine.

You may think you are proposing something new, but you aren’t.

While these Wagner-Meerwein rearrangements are typically referred to as ‘hydride shifts’, that name should not be taken too literally (as in your first scheme). Instead, it is a concerted orbital interaction. There is never any hydrogen cation or hydride anion formed, hydrogen remains in the vicinity. The entire process is concerted and thus proceeds suprafacially.

Writing the central structure as a double bond with proton in the vicinity, as you did, or as ‘two cations coordinating a hydride anion’ is really only a formality. It is not an intermediate in any way, it is a transition state.

Being a transition state, by the way, means that it is a directed process. If the hydrogen went half way, it is going to proceed on (law of inertia, if you wish) and not go back. However, given a sufficiently stabilised cationic system, it may reverse at a later moment in time.

Not the answer you're looking for? Browse other questions tagged organic-chemistry reaction-mechanism carbocation or ask your own question.

1
How does a carbocation have a positive charge?
1
Isn't the mechanism of aqueous sodium hydroxide and 1-bromobutane involves both heterolytic bond fission and attacking by a nucleophile?
8
Is a sequence of two Wagner-Meerwein rearrangements possible?
7
Clarification on the $\mathrm{S_N2}$ mechanism
1
Carbocation formation in electrophilic addition of hydrogen halides to alkenes
2
Deuteration of enone - mechanism?
4
Mechanism of ring formation of an epoxide under acidic aqueous conditions
4
Mechanism of Fritsch–Buttenberg–Wiechell rearrangement
0
Acidity of alpha hydrogens in enolate formation