Why exactly does atomic radius increase down a group?

I realize this should be a fairly basic question, but I'm still not quite satisfied with what I've been told from numerous sources. The general explanation seems to state that as we go down a group, there are more electron shells present to contribute to a "shielding" phenomenon, where inner electrons cancel out part of the inward force from the nucleus with a repulsive force. Thus with more energy levels present and more shielding, valence electrons begin to reside further and further away from the nucleus.

In general we have $Z_\mathrm{eff} = Z - \sigma$ where $Z$ is the nuclear charge (that solely depends on the number of protons) and $\sigma$ is the shielding constant, which reflects the electron-electron repulsions but is not a simple function of the number of core electrons.

One of the earliest models to determine $\sigma$ was described by Slater in 1930.1 These are easily found online as "Slater's rules". These are quite simplistic, and so people tried to find better ways to calculate $\sigma$. Nowadays, one very popular source for values of $Z_\mathrm{eff}$ are the Clementi values.2 That's still quite long ago, so you can imagine that since then, we have come up with even more complicated ways to calculate it.

A peculiarity is that the values of $Z_\mathrm{eff}$ actually increase down the group. At the very least, that should dispel the myth that $Z_\mathrm{eff}$ only depends on the number of core electrons. 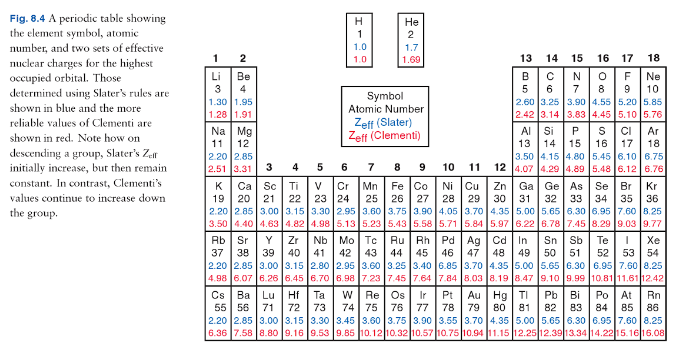 "Surely that should mean that the atomic radii decrease down the group!" you say.

I don't fault you for thinking that at all. However, that's not what we see: the atomic radii clearly increase going down the group. The second factor is the principal quantum number, $n$.

Note that I didn't compare a 2s orbital in lithium with a 3s orbital in sodium. Why? That's because sodium has a larger effective nuclear charge, and this serves to contract all the orbitals in sodium relative to those in lithium. Essentially, the orbitals are pulled inwards by the larger $Z_\mathrm{eff}$.

So, as you can see, going from lithium to sodium, there are two competing factors:

Unsurprisingly, it turns out that the variation of atomic radius is dependent on a combination of the two. We know that the atomic radius increases going down the group, so that must mean that the increase in $n$ (going from 2 to 3) outweighs the increase in $Z_\mathrm{eff}$ (going from 1.28 to 2.51), although it's sadly difficult to find an exact mathematical formulation in any textbook. It's likely that the exact dependency is very complicated and nowadays, such atomic properties are mostly calculated computationally anyway, which removes the need for such a mathematical formula.

3 I'm talking about $\langle r \rangle$, not the radius of a Bohr orbit, although that does also increase going from 1s to 2s.

4 I'm avoiding the circular logic that "higher energy means further away". It is further away because that is just the form of the radial wavefunction obtained by solving the Schrodinger equation - period.

I will try to be simple. There are 3 things which affect the atomic radius of an atom.

Now, if we combine all these three effects, we will arrive at the following conclusion:

On coming down the group,

Atomic radius increases down the group and decreases from left to right in a period.

We have to keep in mind 3 main points while considering this trend:

Therefore the electrons get more attracted to the nucleus, hence the atomic radius contracts when we go from left to right in a period.

Down a group means that the valence electrons are on a higher energy level (they are further away from the nucleus). You would also expect that going down a group, nuclear charge increases (more protons), however, the electrostatic strength down a group is relatively the same. Why? well because there are more shielding due to more energy levels so overall nuclear attraction is similar.

Z eff = Z(no. of p) - S(shielding e) <-- finds effective/overall nuclear charge. Let's take oxygen and sulfur for example. Z eff for oxygen = 8-2=6 and Z eff for sulfur = 16 - 10 =6. This means that the overall electrostatic attraction between the nucleus and the valence electrons are similar, so the major factor must be that the electrons are on a higher energy level, so they are further away from the nucleus, that results in larger radius. So going down a group always mean larger radius.

Not the answer you're looking for? Browse other questions tagged electronic-configuration or ask your own question.

0
Atomic radius and nuclear effective charge in a group

9
Why does oxygen not like to be a double anion?
8
How does the radial distribution function of Vanadium differ from that of Calcium and how does this affect the ionic electron configurations?
6
Are Slater’s rule and lanthanide contraction contradictory?
1
Why does the Most Stable State of an Atom Tend to be One with Full s and p Subshells?
8
Reasoning for why anions have larger radius
2
Why are higher-energy orbitals larger in size/radius?