We were doing the chapter Biomolecules in class the other day, and a doubt popped up once we reached the section on proteins.

We were taught that the stuff that keeps proteins together are: Ionic bonds (not always), Covalent bonds (peptide bonds and di-sulfide bridges), van der Waals' forces and hydrophobic interactions.

Now I've heard that certain bacteria are known to survive extremely hot conditions (Inside thermal vents, volcanoes, the like), like Thermus aquaticus, the source of taq polymerase. I'm told they're able to survive in those conditions because their proteins (enzymes and other cell components) show a very high level of thermal tolerance.

I tried reading up more on that, but Wikipedia adopts a very vague, generalized approach to the topic and doesn't specifically mention what imparts this high degree of stability to these proteins. https://en.wikipedia.org/wiki/Thermus_aquaticus

Sure, maybe an incredibly extensive network of those interactions (say, hydrogen-bonding) would impart a good deal of stability, but I suppose such a protein would be incredibly compact, and twisted in all sorts of wacky shapes to generate the required stability.

I even tried comparing the structures of taq polymerase (First image; which denatures at about $100\ \mathrm{^\circ C}$) and salivary amylase (Second image; which denatures at a little under $40\ \mathrm{^\circ C}$), but to my (untrained) eye, there doesn't seem to be some absolutely fantastic and unique character to taq polymerase going by the structure that is: 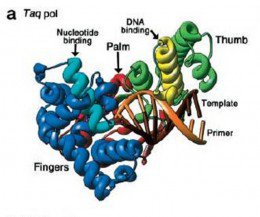 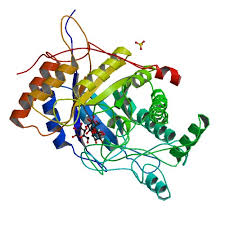 So what exactly is it that imparts such high thermal stability to some proteins? Is it just a vastly intricate network of the earlier mentioned interactions, or is it because of something else?

They analysed the parameters number of cavities, volume of cavities, surface area of cavities (all relating to cavities on the surface of a given protein), number of hydrogen bonds, number of unsatisfied potential hydrogen-bonding candidates, number of ionic pairs (the ionic pairs were analysed for distances of $4~\mathrm{Å}, 6~\mathrm{Å}$ and $8~\mathrm{Å}$) number of α helices, number of β strands, number of unordered loops and the ratio of polar to apolar amino acids (both of exposed and of buried residues). These were all assigned a $P$-value; this defining the probability of the observed effect occuring if the null hypothesis ($H_0$, ‘this feature does not contribute to heat stability’) were true.

The single most important influence on the stability of both moderately thermophilic and hyperthermophilic proteins proved to be additional ions pairs as shown in table 1 below.

Furthermore, the authors point out that the choice of amino acid is somewhat influenced; however, the effects are not as strong. Moderately thermophilic proteins tend to favour arginine over lysine and use less lysine than mesophiles; hyperthermophiles incorporate both more lysine and arginine residues. Tryptophan, glutamate and aspartate are significantly increased in hyperthermophiles; moderate thermophiles incorporate less tryptophan and slightly more aspartate and glutamate than mesophiles. Also, hyperthermophiles exhibit a preference for large unpolar amino acids (leucine and isoleucine) and and have a reduced methionine and asparagine content. Since both latter amino acids decompose more readily at elevated temperatures, their reduction was expected. Cysteine content is either similar or reduced, showing that increased disulphide bridging does not contribute to thermic stability.

Previous studies and theoretical models[2] have shown that ion pairing is expected to have a marked effect on stability. At room temperature, the formation of a salt bridge leads to an unfavourable reduction of solvation which overcompensates any enthalpy gained. At higher temperatures however, this desolvation penalty is strongly reduced and the stability gain from salt bridges thus increased.

The authors do point out one major caveat concerning hyperthermophilic proteins they studied:[1]

It should be noted, however, that the number of known structures of proteins from organisms with $T_\mathrm{opt} \approx 100~\mathrm{^\circ C}$ is very small (there are only five such structures in our data set). This means that our conclusions pertaining to proteins from extremely thermophilic organisms might be of limited validity; in fact, it is possible that much of the observed deviations are because of ‘sample bias’ (i.e., the peculiarities of the available protein structures).

To be frank, thermostable proteins are stable because they as you state contain a huge amount of stabilizing interactions. [notice my dry humor]

You state that the presence of large and complex hydrogen bonding networks would cause the protein to adopt a compact conformation, however you also show structures with alpha-helixes which certainly have a lot of stabilizing h-bonds.

Notice how the thermostable taq polymerase have nearly all of its amino acid residues in stable secondary structure, while the amylase have a lot of unordered loops, which certainly wont help with thermostability.

I can tell you from personal experience that protein structures can easily have hundreds or even thousands of small stabilizing interactions. If you want to see some examples, download a free version of pymol and start browsing the structures on (RCSB.org). I suggest reading a couple of articles about protein engineering on enzymes with the focus of improving thermostability (for example https://www.ncbi.nlm.nih.gov/pubmed/27899916).

Not the answer you're looking for? Browse other questions tagged stability proteins structural-biology or ask your own question.

23
What makes an epoxide stable?
4
How to connect proteins via disulfide bonds computationally?
1
why do we denature proteins before mass spectroscopy?
1
What provides the energy allowing membrane proteins to facilitate diffusion across the membrane?
2
Why don't proteins form branched polymers?