I was wondering if it is possible to make formaldehyde (1) from urea (2).

I noticed that they have a similar structure, but the two hydrogen atoms in formaldehyde are replaced with two amide groups in urea. Would it be possible to remove those groups and replace them with hydrogen?

This is more a proposition than an answer but after a lot of search on the net, in publications and also with the help of @orthocresol, @Jan and @jerepierre, I propose a reaction that will work. Also the question ask is really unusual, because it is obviously awfull to want to synthetize formaldehyde from urea.

You will find first in this "answer" the best way we found to make it. When I'll have time, I'll add all ideas I had and explain why it was not a good point.

A good question raised by this question is, "is it possible to "cut" the $\ce{C-N}$ bond to replace it by a $\ce{C-H}$ bond?" and if possible in one step. For the moment nobody knows.

The best way we found : 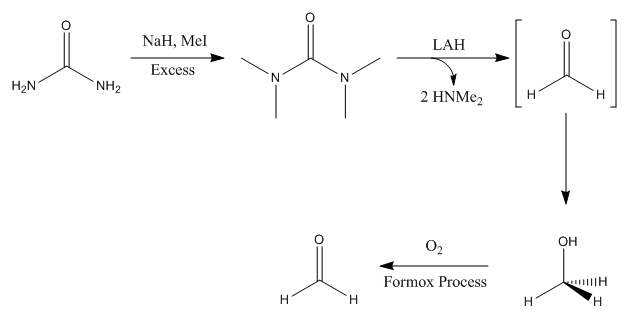 For the moment I can't explain you why I chose to make the N-alkylation but I know I got it in many of my organic chemistry lessons that this groupement will leave the molecule involving LAH so I wanted to do that. Also we are not at one more step from urea to get formaldehyde.

For the other part formaldehyde is much more reactive than the amide function because on the "diamide" both lone pair of nitrogen atoms are involve in mesomeric forms with the oxygen. Then the carbon is really not electrophilic and LAH will react then one the most reactive function in the reactor which will be the aldehyde.

And then the Formox process because it is use in the industry so I'm sure it will work.

After you will find ideas I had but that won't work too. I'll explain as much as as possible when it will be possible. Sometime it will be only because by experiments nobody have ever succeeded to do it.

This one won't work, one of us, I don't remember who didn't find anything in SciFinder about the possibility to make Eschweiler-Clarke reaction from an amide and especially urea.

This is really awfully awkward because you need formaldehyde itself to make the synthesis of formaldehyde. I was not thinking at that when I start but few minutes later it appears to me that I haven't realize before ^^

At the begining I thought it was great to use $\ce{HCl}$ in excess with $\ce{NaNO_2}$ and then get the carbonic acid $\ce{HO(CO)OH}$, because there is nice ways to reduce this acid and its derivatives but just one time. You can find informations in this publication. But when you have $\ce{H(CO)OH}$ I have really no idea of what to do, even $\ce{LiAlH_4}$ won't work. So at the moment I just have the first possible reaction.

Well also in terms of atoms economy using urea to synthetise formaldehyde is absolutely awkward too.

I hope you find some fun here, I keep thinking about it but it looks to be tricky. Have a good day.

17
Is it possible that diamond can be grown from aqueous solutions?
6
Can salicylic acid be synthesized from salicylaldehyde?
4
How to convert an organic carbonate to its formate ester?
11
Stability of transition and post-transition metal alkoxides
7
Evaluation of a synthesis from aspirin to paracetamol from this Nile Red video
4
Synthesize coumarin from 4-allyl-2-methoxyphenol (eugenol)
5
Reduction of 1,4-benzoquinone in the synthesis of 1,5-diazocane
12
Possibility of π–π stacking in non-aromatic systems