Why do buffers need to be composed of equal amounts of the acid and salt?

In the latter example there is a clear imbalance in the salt:acid ratio. However, won't this still act as a buffer, while not as strong as an equally concentrated 1:1 buffer? So it will work, it's just not ideal?

They don't need to be comprised of equal amounts. However, when you are near the 50:50 point, the buffer is "unbiased" (a contrived term), and it can equally accommodate assaults to its pH going in either direction.

If, as in your first example, you're sitting at equal concentrations of sodium acetate and acetic acid, dropping in a 1 mole of either NaOH or HCl won't overwhelm the buffer capacity (pH will change, but not as quickly as it would when you exceed capacity).

So while they don't need to be at the 50:50 point, it's generally a good idea to stay in that order of magnitude (which is why recommended buffering ranges are roughly 1 pH unit); 10:90 is iffy (used appropriately, it works fine), but 1:99 is nearly pointless. The pKa is the theoretical pH when at a 50:50 mix, so different chemicals are used for different pH buffers (Good's buffers shown below). 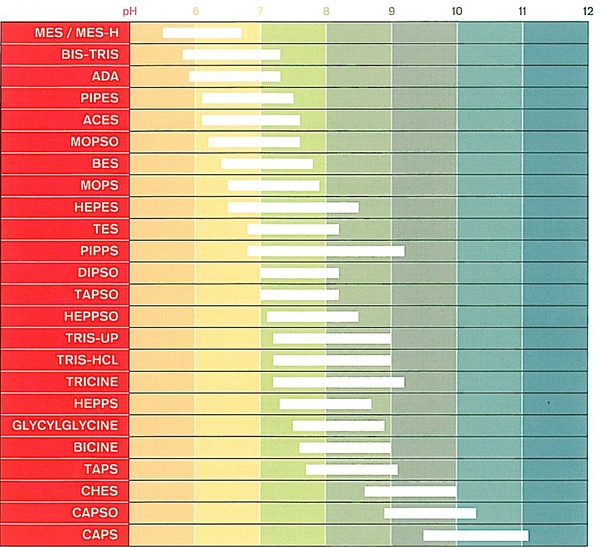 2
At equilibrium, the mass of reactants and products are equal. Does that mean the reaction stops?
2
What's happening at the beginning of a weak acid titration?
3
At equilibrium are the rates of the forward and backward reactions equal to zero?
0
Why doesn't hydroxide concentration equal concentration of carbonic acid and bicarbonate in a sodium bicarbonate solution?
1
Is the amount of substance of acid and base always equal at the equivalence point?
2
Are the best buffers those that are in a 1:1 ratio with its conjugate acid/base?
1
Why is the concentration of protons equal to the concentration of a strong acid?
1
Calculating the pH of a buffer made by a diprotic acid and its double salt