My Idea: I thought that in the first step protonation of the hydroxyl group will take place followed by formation of a carbocation. Then the attack of bromide ion from hydrogen bromide takes place and that would give me 3-bromoprop-1-ene. Also, I thought since the double bond still remains Markovnikov addition at the double bond might also take place.

But the reaction results into something different Here is a picture of the above reaction: 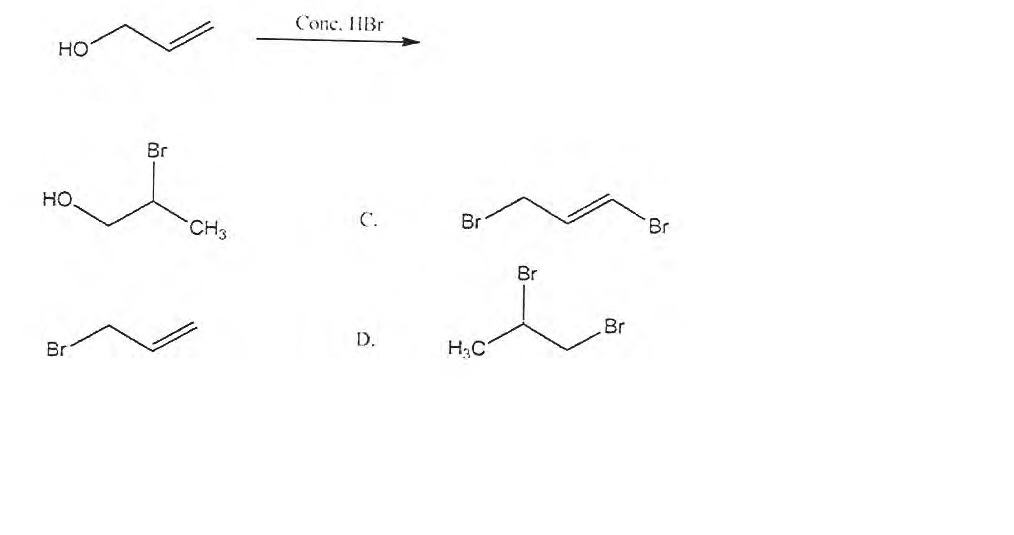 The answer has been given as option C. Could someone point out where I might be going wrong or how should the reaction actually proceed?

Rather than trying to rationalise what the question wants to know, I ran a quick SciFinder search. One of the first results was the following reaction, reported for the perdeuterated allyl alcohol by Thiem, Mohn and Heesing in 1985:[1]

Scheme 1: Reaction of perdeuterated allyl alcohol with $\ce{HBr}$. All implicit hydrogens in this scheme are deuterium atoms.[1]

Thiem, Mohn and Heesing do not go into details regarding the mechanism, but as I commented it really doesn’t matter whether the reaction follows a $\mathrm{S_N1}$, $\mathrm{S_N2}$ or $\mathrm{S_N2'}$ mechanism, since the final product will always be the same. In any case, the first step will be protonation of the hydroxy group to turn it into a better leaving group.

Another one of the first results was the following, reported by Karki and Magolan in 2015:[2]

Their proposed mechanism includes the in situ creation of $\ce{Me2S^+-Br}$ which will then react with the double bond giving a bromonium ion; this will then be captured by a second bromide to give 2,3-dibromopropan-1-ol.

I was unable to find single-step reactions of allyl alcohol with hydrogen bromide leading to either 2-bromopropan-1-ol (which would imply a single Markovnikov addition of $\ce{HBr}$ onto the double bond), 1,2-dibromopropane (which would imply Markovnikov hydrobromination of the double bond of allyl bromide) or 1,3-dibromoprop-1-ene (where I have no clue how exactly that would be generated from allyl alcohol in the first place). Funnily enough, you state that this last product, C according to your scheme be the correct answer. I challenge the exam.

I found a patent dating back to the 1930s in which the dichloro homologue of C was produced in almost quantitative yield via Hydrochlorination. Long reaction time (100 hours) at 50-70C. When it was discovered, it was a surprise (they say) but I presume people didn't leave hot-plate stirrers going for days....

With this in mind, I decided to find out if Hydroiodination would yield 1,3-diiodoprope-1-ene (C analogue). Will hydroiodination live up to the theory?

It turns out that it's a rather difficult compound to come by with only 1 synthesis offered and that was hard to find:

If I have missed a simple synthesis then I can only apologize but the stuff doesn't have a CAS. Searching for (E/Z ignored) '1,3-diiodoprop-1-ene' yields almost nothing so try '1,3-diidopropene' which if you think about it, describes it! IUPAC can be no help.

Not the answer you're looking for? Browse other questions tagged organic-chemistry alcohols erratum or ask your own question.

2
Free rotation of sigma bonds; diastereomer formation; thermodynamic and kinetic products
6
Acid-catalysed Reaction of Ketone with Benzene to Make Benzyl Alcohol
5
What are the products in this reaction?
7
Preparation of Effexor
11
Why does a proton prefer to attack a double bond instead of protonating an alcohol in a reaction of unsaturated alcohol with sulphuric acid?
3
Determining the mechanism followed when alcohols undergo a reaction with sodium bromide and sulphuric acid