Chemically, Benedict's solution and Fehling's solution are very similar, with copper sulfate as a source of copper (II) ions, sodium carbonate, and sodium hydroxide respectively as alkalis, and sodium citrate and sodium potassium tartarate respectively as chelators. They are also both used to test aldehyde groups which can reduce the copper (II) ions into copper (I) ions, giving a precipitate of $\ce{Cu2O}$. Hence, they are often used in testing for the presence of aldehydes, and by extension, reducing sugars.

Are there any differences in function between the two reagents, perhaps in sensitivity, types of compounds that test positive, etc?

Fehling's reagent was invented by Hermann von Fehling in 1849. You notice that this solution is given as two separate solutions, and is only mixed together while performing a test. This is because the complex formed when mixed ($\ce{[Cu(C4O6)2]}$) is kinetically favored, and that $\ce{Cu(OH)2}$ will eventually precipitate out due to being favored energetically. That's why the two solutions are stored, and only mixed during testing. 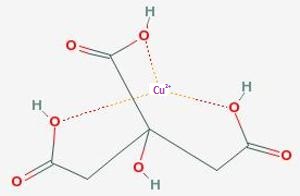 Both the reagents have a similar way of oxidizing aldehydes. The copper complex oxidized the aldehyde to a carboxylic acid, and while reducing itself from $\ce{Cu^2+}$ to $\ce{Cu+}$ ($E^\circ = \pu{0.154 V}$). This reduction potential is sufficient to oxidize aldehydes to carboxylic acids. There is not much difference here though.

Neither of the reagents can oxidize aromatic aldehydes, due to the fact that they lack α-hydrogens, and thus oxidizing them requires stronger oxidizers (like Tollens’ reagent).

In short, Benedict's reagent is kind of like an "improved" version of Fehling's reagent, which is much more stable due to the difference in the complexing agent.

0
How does the Benedicts Test work?

25
Why does fructose reduce Tollen's reagent and Fehling's solution?
3
How much lactose is there in milk (mechanism)?
0
Copper sulphate, Benedict's Reagent and albumin
12
Why do alpha-hydroxy ketones respond positively to Tollens', Fehling's, Benedict's, Schiff's and HgCl2 tests?
11
Ambigious nature of aldehydic group in glucose
4
Difference between Side Chains and Functional Groups
2
Fehling's solution turning yellow and then black?
2
Carboxyllic acid Test