I am a student of organic chemistry and I frequently watch online open course lectures by various professors around the globe. Of these, in https://www.youtube.com/watch?v=OYAMls5x4EI, at about 27:10, I had a question, as mentioned in the image below.

What factors determine where the palladium will attach?

My initial thoughts were to find out the electron-rich regions of the $\pi$ bond, and the palladium atom in the $\mathrm{+II}$ oxidation state will act as an electrophile. But I wasn't able to figure it out exactly.

I understand that the ratio of products shown in the figure can be controlled by using various ligands, especially based on their steric effects, in this case.

Your mechanism is missing an important step: between the oxidative addition of palladium into the $\ce{C-Br}$ bond and the alkene insertion there should be an alkene annealing forming a palladium-alkene complex. This is displayed in the mechanism scheme of a generic Heck reaction below, which I sheepishly borrowed from Wikipedia. 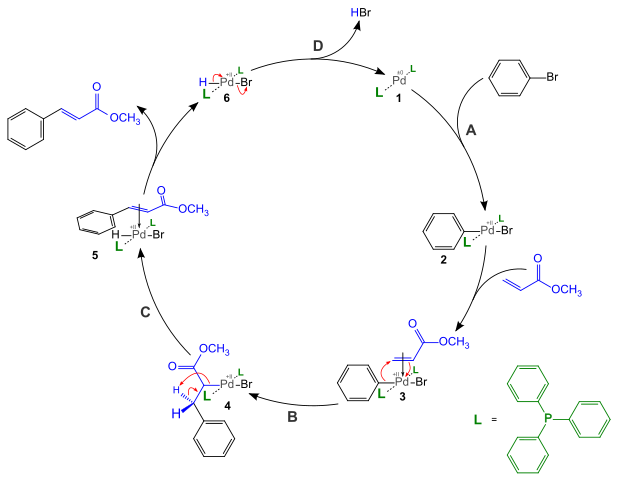 Scheme 1: Catalytic cycle of a Heck reaction. Image taken from Wikipedia, where a full list of authors is available. Note that the β hydrode elimination in step C should be syn and not anti or gauche as displayed.

The annealing step and the π complex are important because they influence the Heck reaction’s selectivity. Due to the avoidance of steric stress, both residues will adopt an anti-type conformation as depicted in structure 3. On the (syn-selective) insertion of the alkene into the $\ce{C-Pd}$ bond, this geometry is kept resulting in the palladium catalyst ending up on the higher-substituted alkene carbon. For the inverse insertion, both organic residues — in your case two phenyl groups — would have to occupy the limited space on one side of the catalyst.

The alkene insertion into the $\ce{Pd-C}$ bond, is not reversible. Two $\ce{C-C}$ single bonds are formed at the expense of a palladium-π interaction resulting in a notably downhill process.

Just have a look at the reductive elimination step of this Heck reaction:

In case of the second reaction the resulting allylalcohol is far less stable than the enol tautomerizes to the ketone. The other thing are sterics aspects that make the migratory insertion step far less favourable for the second product as well.

Not the answer you're looking for? Browse other questions tagged organic-chemistry reaction-mechanism aromatic-compounds catalysis or ask your own question.