I proposed the following lewis structure for $\rm NCO^\oplus$

The problem is that this structure is linear, while my book tells that the structure is not linear. What will be correct canonical structure?

Also is it correct to call the following as resonance structures?

As always, writing a Lewis structure seems to be a trivial task, but sometimes it just isn't. The smaller the molecule becomes, more often than not the bonding situation becomes more complicated and complex. This can often be attributed to the high symmetry of such molecules. Prime examples are $\ce{O2}$, $\ce{CO}$, $\ce{CO2}$, $\ce{N_xO_y}$, etc..

I found no evidence anywhere that $\mathbf{\ce{NCO+}}$ is bent. I have tried calculations in the singlet and triplet states and all of them lead back to the molecule being linear. It would be nice to know which textbook you are using for general reference.

Lewis structures were not meant to accommodate complicated bonding situations. Instead they are meant to be easily understood. Even the concept of resonance can be quite tricky in certain situations. Without knowing that the ground state of dioxygen is a triplet state, we would interpret its common Lewis structure wrong.

The same shall apply here. We need to treat the concept of Lewis structures within its limitations. Based on the triplet DF-U-BP86/def2-SVP calculation the best representation is probably a bit surprising: The positive charge would be located at the most electronegative atom, while the spin density is located at the nitrogen (1). The broken symmetry solution gives us instead two double bonds with the positive charge at the nitrogen (2).
In all cases we shall not forget, that the most electropositive element is carbon in this molecule, so the actual charge is most likely located there (3). Since the π-orbitals are stretched over the whole molecule, the spin density will not entirely be located at nitrogen alone (4). A meaningful interpretation in terms of resonance structures (NRT of NBO) is, however, almost impossible. I tried it based on the closed shell singlet DF-BP86/def2-SVP calculation and there are three contributing main structures (5). 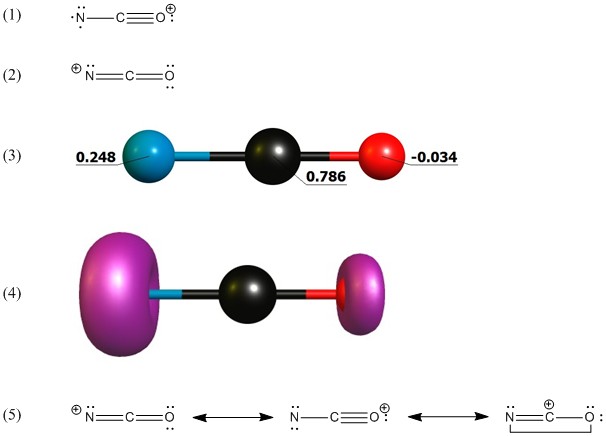 For what it's worth, the structures you have proposed are valid resonance structures. They are not all of them, but they are a good start. As you can see, any of them capture only a tiny glimpse in the complicated nature of this molecule.