Why is sugar syrup so sticky?

On the festival of Diwali, Indians exchange sweets and share their love. I did just that this very morning, but things don't always go the right way. I dropped a box of sweets and the sugary syrup spread all over the floor. Now while cleaning up the floor, a question popped up in my mind: Why is sugar syrup is so sticky? Is there any chemical phenomenon responsible for its stickiness?

Since I'm a high school student and not a chemist, I can't seem to think of any possible explanation. I shall be thankful if someone could direct me the right way here.

The "sugar" you refer to is sucrose, which is a disaccharide (a fancy term we use for a type of sugar, composed of two other bits of sugar called monosaccharides; which in this case, are glucose and fructose). I felt I ought to have brought up the sucrose specification, since when you talk chemistry, "sugar" can refer to a whole lot of things.

Anyways have a look at this diagram: 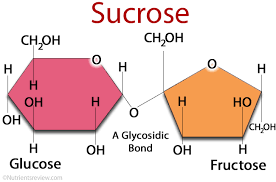 Observe carefully, and you'll see that there are 8 -OH groups (hydroxyl groups) in a molecule of sucrose. Now why did I direct your attention to these particular groups? It's because they're capable of taking part in a fascinating phenomenon called hydrogen bonding (I believe you already know a bit about it, so I won't go into details).

Now when you add a solute to water, that is capable of H-bonding, it sorta causes all the water molecules and solute molecules to 'clump' together. The greater the amount of H-bonding the solute displays with water, the greater the tendency for all those interaction to put up some resistance to the flow of water. This ability to 'resist flow', that is inherent to every real fluid (to different degrees of course), is what you call viscosity.

Now 8 hydroxyl groups, can result in some pretty extensive H-bonding. To give you a rough idea as to how much that contributes to the viscosity of the sugar solution, think of glycerine (glycerol). Rub some of it between your fingers, it's pretty viscous right? Now the thing is, a glycerol molecule has only 3 hydroxyl groups. So imagine how much more viscous/sticky the sugar solution ought to be, when it's got nearly 3 times as many hydroxyl groups! [No, I'm not saying H-bonding is the only factor you should consider]. Of course, the more concentrated the sugar solution, the more the sucrose molecules and hence more the H-bonding; so it'll get stickier and stickier.

Now another thing you ought to consider is the geometry of the sucrose molecule. Now it isn't as important as the H-bonding bit, but it's still noteworthy. What you must know is that the sucrose molecule is not a planar molecule. It isn't some 2-dimensional structure. It's got all sorts of groups sticking out above and below the plane of the carbon rings. Now at low concentrations this isn't really an awfully important thing, but the story changes when you're dealing with concentrated solutions. That's when the 'jagged' physique of the sucrose molecule comes into play. It serves to compound the effect of H-bonding and further obstructs flow.

Want an analogy for that bit on the importance of the molecule's geometry?

Imagine you've got this large sack of coins. Dump them onto the floor and they spread out so well, that you wouldn't be wrong if you said they flowed. But suppose you had nothing better to do, and decided to glue a couple of screws on both faces of each coin. Put all your coins back in the sack, and proceed to dump out the whole lot. You can easily picture how well this 'modification' obstructs the flow of the coins, and probably now, you can appreciate the importance of molecular geometry in this regard better.

"Is there any chemical phenomenon responsible for its stickiness?" You mean compared to a supernatural one? Almost everything that matter does in the everyday world has a chemical basis. (Radioactivity, weight and movement are examples of physics which most would agree aren't "chemical".)

Sugar is a polar organic compound. Actually, "sugar" is the name for several related polar organic compounds. "Table sugar" (in the USA) is the common name for sucrose. Sucrose can be chemically broken apart into glucose and fructose, both of which are also sugars, and are also sold commercially. The three dietary sugars are glucose, fructose, and galactose - and you'll note that sucrose isn't included although it is the most common! (Since the body naturally breaks it down into fructose and glucose, it's "included by implication").

The reason sugar is sticky is because of "hydrogen bonding" (H-bonding). In high school, you may have learned that there are two types of chemical solids (compounds): ionic and covalent. All chemistry is "caused" by electric charges. In ionic compounds, the charges behave without directional preference - charge density is spherically uniform while in covalent compounds charge density is confined and is usually shared between "bonded" atoms. (I am ignoring metal bonding here, which arguably is a third type of solid). Despite its name, H-bonding is not usually included when we're talking about chemical bonding (sometimes it is, usually it is not). H-bonding is weaker than the weakest covalent bond. Water is an example of a material which gets many of its physical properties because of its H-bonding. The size of rain drops, the ability of insects to walk on its surface, and its melting and boiling points all are greatly influenced by the H-bonding that naturally occurs in it. By far the most common H-bond is the one between an -OH group (part of a large molecule) and an -O- "group" (although we'd usually say O atom). Often you will see H-bonds drawn as -OH...O- or something similar. They are much stronger than the typical interactions between separate molecules (and, as I said, weaker than the bond interactions between covalently bonded atoms) (of course, these things aren't black/white yes/no questions, there is a scale of strength...)

So, sugar! If you take a look at the structure of sucrose (see Wikipedia), you'll see that there are 8 -OH groups on each molecule and that there are 3 more O 'groups' (a total of 11 O atoms capable of forming H bonds). That's a whole lot! So in a concentrated solution of sucrose, you'll get a lot of H-bonding which acts to link the fairly small sucrose molecules into chains. In fact, one experiment you can do is to heat a concentrated solution of sugar and see if you can make strings or threads of it by putting a spoon into it and pulling it quickly out. Cotton candy is popular at fairs in the USA and is based on this (although has been improved by trial and error changes to the process and recipe).

Plastics are polymers which exist as chains. Most glues also are polymers. Our skin is composed of polymers. As a matter of fact our skin is composed of polar polymers. And sugar, also being polar, will tend to "stick" to our skin. But not only are they polar, both are capable of H-bonding. So, you have two different chemical phenomena: concentrated sugar solutions have a cohesive strength (it sticks together) and it has an adhesive strength (to polar surfaces). These are what make it sticky.

One thing I've not explained is what I mean by "polar". It has to do with electric charge. In the context of molecules, when the negative charge density is centered at the same point as the positive charge density, a molecule is nonpolar. When the centers don't coincide, the molecule is polar (or if the positive charge is on an entirely different atom than the negative charge AND its a whole number, then we'd call that an ionic molecule) In other words, polar molecules are molecules which have fractional separation of negative and positive charges. It is a bit more complicated than that: In CO2 there is more negative charge "on" the O atoms than on the central C atom. But because the molecule is linear (the 3 atoms form a straight line in space) the center of negative charge is on the central C atom, despite its being slightly positively charged. NO2 is a slightly 'bent' molecule, it's not straight so although the negative charge on both O atoms is equal, they don't "cancel out" and the molecule is polar. So, we have a "spectrum" of polarity from something like H2 which is non-polar (and no charge separation) to CO2 which is also non-polar but with charge separation to NO2 which with a central bond angle of 134.3° is polar, but only "slightly" to HCl (in the gaseous state) which is very polar (but still covalent) to H(+)Cl(-) in solution which is ionic.

6
Why is sugar used in low-cost homemade rockets?
4
Difference between white sugar, brown sugar and red sugar
2
Sugar dissolution test
21
Why is gum so sticky and what chemicals make for easy removal of gum?
1
Why does rice become sticky after cooking?
50
Why doesn't frozen sugar solution taste sweet?