Which of the following pyridines are most basic? 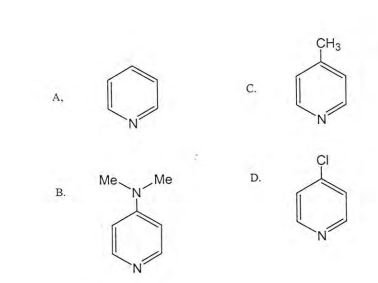 I would've considered D, since chlorine is the most electronegative, and would therefore have the largest partial negative charge, making it more basic than the nitrogen substituent. The answer given, however, is B. How can I reason this for myself?

First let’s take a look at basicity and what factors into it. For a molecule or group to be basic, the following reaction (1) needs to occur adequately favourably:

Remember that electronegativity is the ability of an atom to draw bonding electrons towards it. That is exactly what you want to create a partial negative charge, so if the basic group of a molecule is more electronegative than its surroundings that is what you want. In the context of aromatic compounds, electronegativity is usually described as a $-I$ (negative inductive) or $+I$ positive inductive effect; the former being exercised by electronegative groups and reducing the electron density in an aromatic ring and the latter due to electropositive groups and increasing it.

If we want to create a pyridine that is as basic as possible, we want $+I$ effects, i.e. electron donating groups. If we rank the groups by their ability to donate electrons from $+I$ to $-I$, we get:

The dimethylamino group is a much better mesomeric electron donator than chlorine because nitrogen’s p-orbital is much more similar to carbon’s allowing for a stronger participation in the π system and because of nitrogen’s generally larger basicity than chlorine’s. If you want, you can visualise the $+M$ effect with the resonance structures Ringo’s answer shows.

Taking this all into account, we get the following final rating from more basic to less basic — and note that this corresponds nicely with the respective rates of electrophilic aromatic substitution:

Compared to the ‘standard’ — pyridine — 4-chloropyridine is deactivated (strong $-I$) while 4-methylpyridine is mildly activated ($+I$ effect). 4-dimethylaminopyridine is, of course, strongly activated: the $+M$ effect strongly outweighs the $-I$ effect.

Basicity has everything to do with electron density on the electron-pair donor. Electronegative subsituents actually decrease basicity because they draw electrons towards themselves, though nitrogen and chlorine have comparable electronegativities (3.04 and 3.16 respectively), so I'm not sure you can use that argument here. Instead of inductive effects, let's consider the resonance structures of our molecules:

I think N,N-Dimethylpyridine is the most basic compound due to + I efects of two methyl groups .

Not the answer you're looking for? Browse other questions tagged organic-chemistry homework acid-base or ask your own question.

16
How to determine the most stable carbanion?
2
why are halogens considered deactivating groups while methoxyl groups are activating?
1
Relative basicity of fluorine and oxygen in silyl ether deprotection
3
Reactivity and transport safety of substituted methyl benzoates
6
Order of Basicity of Nitrogen Trihalides
6
Resonance of lone pair of nitrogen in 4‐nitroaniline and piperidin‐2‐one