Why do Asn-Ser and Gln-Thr have different H bonding patterns?

I noticed that Asn-Ser H-bonding is different from the H-bonding between Gln-Thr. However both have the same functional groups. I wasn't able to find any information about this. Maybe it's due to steric effects, but because these striking similarities between Asn and Gln and on the other side Ser and Thr I don't think that is an explanation (but maybe it is, I'm just guessing).
excuse me for the drawing, but I couldn't find an image showing this clear 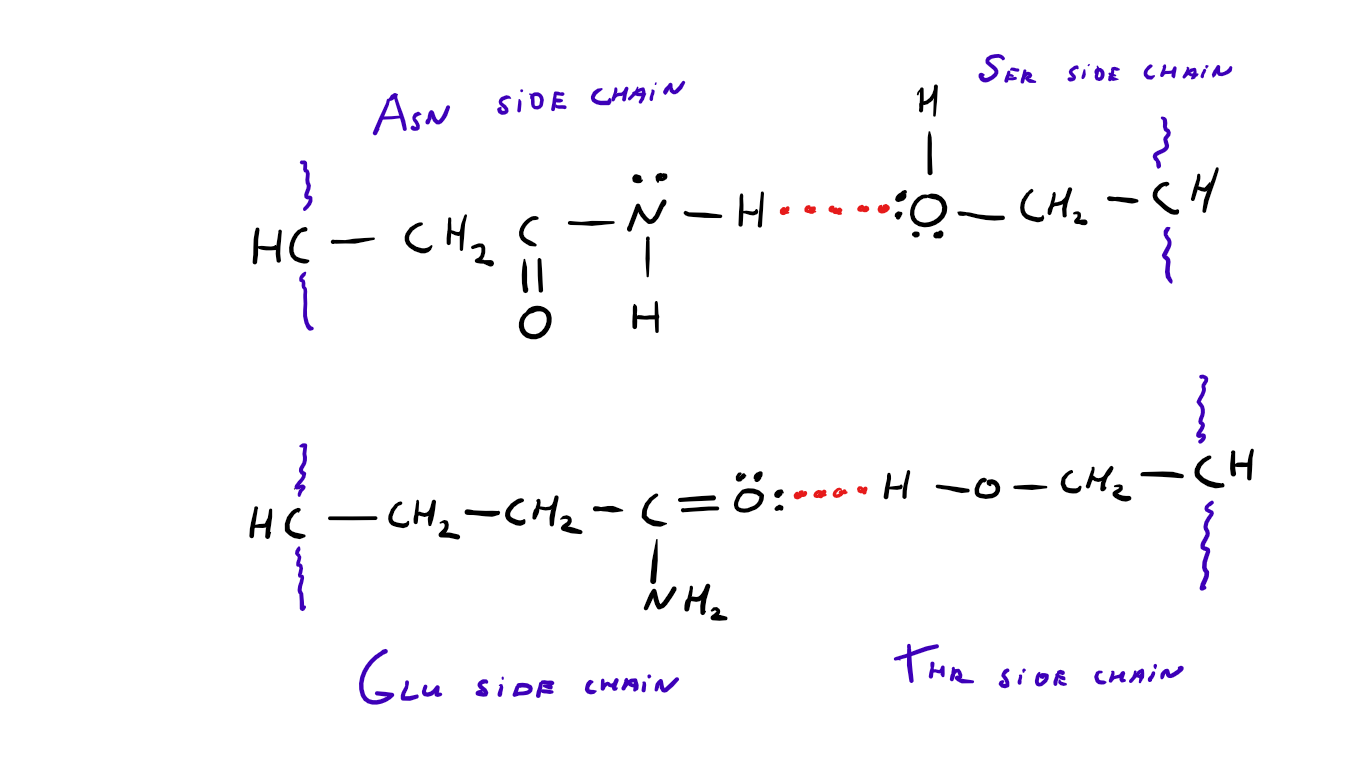 Are al these H-bonds possible?

I don't have the textbook you've gotten this from, but unless there's a statement to the contrary, I suspect these are intended as examples of hydrogen bonding, rather than an exhaustive list of the only hydrogen bonding pattern which can exist.

If you start to look at real structures, you will see both "directions" of hydrogen bonding (hydroxyl donor/carbonyl acceptor and nitrogen donor/hydroxyl acceptor) in real protein structures.

If you spend some time looking at various experimental structures from the PDB website, you should be able to find examples of a wide range of hydrogen bonding patterns - basically, any acceptor and any donor can be paired, depending on the geometry of a particular protein.

One caveat I should mention here is that because of the way X-ray crystallography works, it's often difficult to tell which way the sidechains of the ASN and GLN residues are oriented. With electron density, the NH2 group and the =O group look very similar. Often it's a bit of guesswork on the crystallographer's part to tell which orientation they have, often relying on the layout of neighboring residues to determine the most likely hydrogen bonding network.

However, 1GKT was not determined by X-ray crystallography, but by neutron diffraction. In neutron diffraction it's very clear where the protons are located. (I picked a neutron diffraction structure as the example for this very purpose.) I also double checked that there wasn't any reason for flipping those particular ASN/GLN residues, both by manual visualization and with the MolProbity web server.

You only took two examples into consideration. What about serine and glutamine or threonine and asparagine? Also, serine can hydrogen bond to another serine or a threonine …

What I was trying to point out in this first paragraph is that these examples are really only single examples. Maybe they are trying to show how the same group (hydroxy group and amide group) can be both acceptor and donor depending on the structure. Maybe McMurry just picked four for fun. In any case, you can hydrogen bond from any $\ce{O-H}$ or $\ce{N-H}$ to any lone pair of $\ce{O}$ or $\ce{N}$ in a protein as long as that lone pair is not participating in resonance — this last caveat is really only to capture amides, $\ce{RC(=O)-NH2}$, wherein the nitrogen cannot be a hydrogen bond acceptor due to the resonance structure $\ce{RC(-O^-)=NH2+}$.

And furthermore, unless you have unambiguous side chains — arginine which can only donate or glutamate/aspartate which can only accept at neutral $\mathrm{pH}$ — the orientation of hydrogen bonds is typically left to the guesswork of the crystallograph for X-ray diffraction analysis. But the other answer already goes into detail there.

Not the answer you're looking for? Browse other questions tagged molecular-structure hydrogen-bond amino-acids or ask your own question.

15
Can an amide nitrogen be a hydrogen bond acceptor?

13
Why is HCl not considered to have hydrogen bonding?
10
Why does SO2 have a larger bond angle than H2O, H2S, and NH3
3
Why is the boiling point of water and ammonia so different?
3
Why there is hydrogen bonding involved in salt bridge formation between glutamic acid and lysine?
9
Why does nitric acid have a different molecular structure from phosphoric and arsenic acids?
3
Why do PBr3 and PCl3 have larger bond angles than PH3?