Recently, while reading my textbook I came to know that Helium, Hydrogen and Neon are the only gases which have negative Joule Thomson coefficient at NTP conditions, i.e heating effect is observed when these gases expand from a region of high pressure to a region of low pressure. I was wandering about possible explanations for this strange behaviour (since almost all gases display cooling effect during free expansion at NTP conditions) but nothing came to my mind. Can anyone give me a reason why these gases behave differently at room temperature and 1 atm pressure?

One thing I noticed is that all the three gases in question have compressibility factor(Z) always greater than 1, i.e. negligible intermolecular forces of attractions, but how can this explain their abnormal behaviour?

Note: You can skip section I, and go straight to section II and/or the end of section III (specifically the conclusions subsection), if you are already familiar with the basic mathematical machinery/definitions

Second, our process is carried out as follows: a gas at pressure $p_i$ flows into a region of lower pressure $p_f$ without significant change in kinetic energy. This is called the Joule–Thomson expansion.

Obviously, this process is inherently irreversible. Additionally, one can show that this expansion isenthalpic (i.e $H_i = H_f$). Unlike a free expansion, work is done, causing a change in internal energy; the exact specifics of this change will depend on the initial and final conditions and also on the nature of the working fluid.

What we measure experimentally is a change in temperature with respect to pressure at constant $H$, and we call it $\mu_{\mathrm{JT}}$ (Joule-Thomson Coefficient).

All real gases have an inversion point at which the value of $\mu _{\mathrm {JT}}$ changes sign. The Joule–Thomson inversion temperature, depends on the pressure of the gas before expansion.

The arguments given below might seem a little "hand-wavy"/crude, but bear with me.

During a Joule-Thomson expansion (isenthalpic, adiabatic), the change in $pV$ represents the work done by the fluid.

If $PV$ increases,at constant enthalpy, then U must decrease as a result of the fluid doing work on its surroundings; the working material is using its own internal energy to do work. This produces a decrease in temperature and results in a positive Joule-Thomson coefficient.

Decrease in$pV$ means that work is done on the fluid and the internal energy increases. This can thus lead to an increase in temperature and the Joule-Thomson coefficient will be negative.

For an ideal gas, $pV$ does not change during a Joule-Thomson expansion.

As a result, there is no change in internal energy; also, there no change in temperature; and the joule-thomson coefficient is zero.

In real gases, $pV$ does change. The deviation from ideality (in general) is contained in $Z$, the compressibility factor. Thus, it would make sense if we could make some connection to it.

The ratio of the value of "real" $pV$ to that expected for an ideal gas at the same temperature is called the compressibility factor,

At low pressure, the value of $Z$ always moves towards unity as a gas expands (tend towards ideality).

In general at low temperature, $Z$ and $PV$ will increase as the gas expands, resulting in a positive Joule-Thomson coefficient.

At high temperature, $Z$ and $pV$ decrease as the gas expands; if the decrease is large enough, the Joule-Thomson coefficient will be negative.

It follows, that for the $Z>1$, Joule-Thomson coefficient will be negative and the gas gets warmer. This is the case for the gases in question at the given conditions.

A graph from wikipedia showing how the Joule-Thomson Coefficient changes sign (for nitrogen): 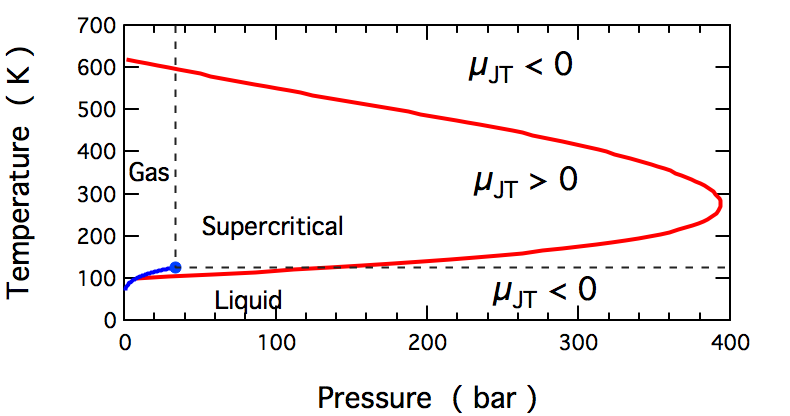 Note: The question originally asked about gases, but I'll make a small point about condensed phases and supercritical fluids (since you can see them in the graph). At high pressures, these phases can't respond to an increase in pressure by reducing their volume, and $pV$ increases as pressure increases. The molecules are being forced together, and such the Joule-Thomson coefficient is negative.

Of course intermolecular forces, attractive and repulsive, and the limits in which they are dominant are key in explaining the changes of $Z$, and consequently of $\mu_{\mathrm{JT}}$. This point is further developed in the next section.

Using equation (1) and the definition of $\alpha$ we can write

Since the Van der Waals gas equation is cubic in $V$, I will use the first few terms of the virial expansion and solve for $V$ to obtain $\left(\frac{\partial V}{\partial T}\right)_p$. I am omitting explicit computations, you may do them as an exercise.

After differentiating we obtain

Now, consider the low temperature limit of this expression. The $\frac{2a}{RT}$ becomes large, and $b$ is negligibly small compared to it so

All the quantities on the right hand side of this equation are positive. so $\mu$ is positive. The attractive forces are dominant, since only the paramter $a$ appears in our expression.

Similarly, the high temperature limit is

Here, $\mu$ is clearly negative. The repulsive forces are dominant, since only the parameter $b$ appears in our expression.

Since joule-thomson effect is isoenthalpic process, so everything is done at the cost of internal energy.

Taking $a$ as the term involving intermolecular forces of attraction and $b$ as the excluded volume, we get:

Thus from the above arguments it can be understood that at inversion temperature both factors balance and hence gas shows neither cooling nor warming under conditions of expansion.

But in case of hydrogen gas during expansion the interaction between its molecule is more so the distance between them is less means they are most attractive as distance decreases the potential energy also decreases hence temperature(K.E) increases which produces heating effect

Not the answer you're looking for? Browse other questions tagged physical-chemistry thermodynamics gas-laws kinetic-theory-of-gases or ask your own question.

1
Joule–Thomson effect: why does temperature decrease during expansion

3
What is the difference between the Joule and Joule–Thomson coefficients?
1
Hydrogen and Helium ideal gas behavior in room temperature
6
Why do Hydrogen and Helium have molar volumes higher than an ideal gas?
8
van der Waals coefficients for helium and neon
2
What is the reason behind the phenomenon of Joule-Thomson effect?
1
Calculating temperature change of helium due to Joule-Thomson effect
4
Why is change in entropy negative and change in enthalpy negative for the reaction of Magnesium and Hydrochloric acid?
4
Derivation of the isothermal Joule-Thomson coefficient