The University of Waterloo page that the article cites says:

The amount of energy required to break a bond is called bond dissociation energy or simply bond energy.

The bond energy is essentially the average enthalpy change for a gas reaction to break all the similar bonds.

So I'm assuming that as the average enthalpy change increases, so does the force that stresses the bond (and thus the forces on each hydrogen atom).

For a single molecule of $\ce{H-H}$, what is the maximum force that the bond can withstand before breaking?

The force and the bond enthalpy are not necessarily directly related.

The bond dissociation energy is the amount of energy released when the bond is formed, or the energy required to break the bond.

The force constant of the bond derives from the curvature of the potential energy curve. For example, if we assume a harmonic oscillator (spring) for a bond, then:

Real bonds aren't purely parabolic, but clearly the second derivative of the potential energy curve near the equilibrium bond length will give the needed force constant.

Here I've plotted two fictional bonds with the same length. The blue curve gives a bond with a higher bond enthalpy and force constant (i.e., the curvature is higher than the red curve). 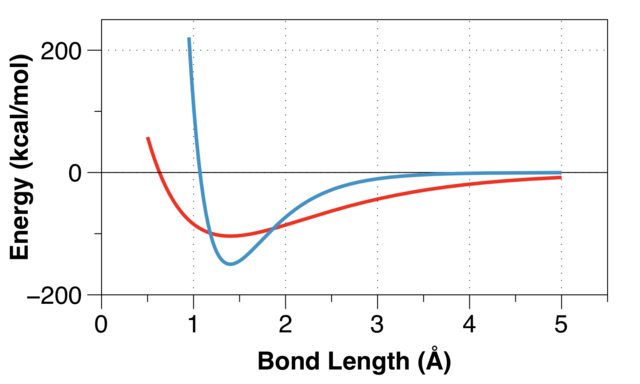 It should be clear that this isn't necessarily true. We can easily imagine some bond that has a shallow curvature but a deep enthalpy.

I should indicate that in many cases, these are related - stronger bonds typically have higher force constants and are harder to distort, but the point here is that the bond dissociation energy does not directly tell us anything about the mechanical strength of a bond.

4
Does the bond dissociation enthalpy vary with temperature?
9
Why is fluorine more reactive than iodine despite the weaker I-I bond?
2
Why is the force constant for double and triple bonds approximately double and triple of that of a single bonds?
4
Are polar bond stronger than non-polar bonds?