Why are aprotic solvents unable to solvate negative ions well?

Why are aprotic solvents unable to solvate negative ions well? I know that the reason is due to the absence of very positive hydrogen atoms, but then why are they able to solvate positive ions well? Shouldn't its ability to solvate both types of ions be the same? I thought there their ability to solvate ions is related to whether they are partially positively or negatively charged, but shouldn't the extent to which they are partially positively or negatively charged be the same as it depends on the relative positions of the electrons?

This can be attributed to the lewis acid/base properties of the solute/solvent. Anions (negative ions) and aprotic solvents both function as lewis bases. They 'repel' each other. However, a cation (positive ion) functions as a lewis acid and is 'attracted', resulting in greater dissolution. How well a compound dissolves in a given solvent depends on a multitude of factors. This includes the two very important ones discusses here, polarity and lewis acid/base character.

This question is mostly about the historical nature of the terminology. Typically, the polar aprotic solvents (IUPAC discourages the use of this term) have nitrogen, oxygen, or sulfurs present, ALL of which are electronegative. Meaning they attract / stabilize positively charged species. Probably the 'best' explanation is that while the electronegative center interacts with cations, the positively polarized parts of the molecule is more diffuse and so its interaction with anions is much weaker. Things like molten LiCl aren't generally considered solvents (at least as far as organic chemists are concerned) since their melting points are typically "unfriendly" to most organic compounds. Compounds like tetraphenylphosphonium chlorides ARE useful to solvate anions BUT aren't solvents because they typically are dissolved in a carrier solvent; typically they (when pure) aren't liquids near room temperature. So, the things which would be (and are) used to dissolve anions are less stable, less liquid, and much more expensive (and difficult to work with) than the typical organic solvents. Ph4P Cl is called a phase transfer catalyst, fyi.

I have no particular data to back this up, but to hazard a guess I would say it's due to more significant Coulomb and/or Pauli repulsion effects arising from the larger, diffuse electron clouds of anions.

Since they're comparatively deficient in electrons, cations are "small": their electron clouds tend to be compact and lie "closer" to the nuclei. Thus, they can "fit in well enough" among the molecules of the aprotic solvent (viz., the entropic cost of solvation is low enough) that ion/(induced) dipole interactions don't have to be especially strong in order to make the solvation process favorable (exergonic).

On the other hand, anions have an excess of electrons, making them "large": their electron clouds are diffuse and typically extend to a considerably larger radius than a corresponding neutral species. Thus, they "fit poorly" among the aprotic solvent molecules (viz., the entropic cost of solvation is high), and without the strong, enthalpically-favorable protonic interactions you mention in your question the solvation process is overall endergonic.

To illustrate this, below are the electron density curves for the gas-phase isoelectronic species $\ce{Ca^2+}$, $\ce{Ar^0}$, and $\ce{S^2-}$, calculated in ORCA v3.0.3 at the CCSD(T)/ma-def2-QZVPP level of theory. (These data are the same as that generated for this answer.) Indicated on the chart are the distances from the nuclei of the $\rho = 0.001$ isosurfaces in the electron density: 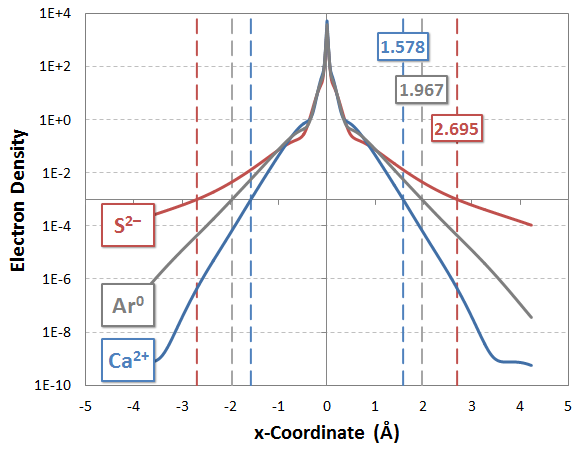 To understand solvation, the first and best approximation is to look at the definition of the term. The IUPAC says about solvation:

Any stabilizing interaction of a solute (or solute moiety) and the solvent or a similar interaction of solvent with groups of an insoluble material (i.e. the ionic groups of an ion-exchange resin). Such interactions generally involve electrostatic forces and van der Waals forces, as well as chemically more specific effects such as hydrogen bond formation.

Just to give an opposite example, water interact with anions mostly by hydrogen bonds. On the other hand, aprotic solvent interacts as well with anions but by a less energetic interaction such as van der Waals. Another angle is by looking at the bond energies. Anions strongly interacts with water and weakly with polar organic solvents.

In fact, aprotic solvents do solvate anions. But, the bond energy of that interaction is too small. e.g. van der Waals interactions (third slide)

To support all statements given here, I recommend the following paper:

Solvation of negative ions by protic and aprotic solvents. Gas-phase solvation of halide ions by acetonitrile and water molecules

Not the answer you're looking for? Browse other questions tagged organic-chemistry solvents or ask your own question.

12
Why are there drastic changes sometimes in radius of isoelectronic ions?

1
Why does acetyl have negative charge?
3
Solvents in substitution reactions
1
Hydrohalogenation vs Hydration of Alkenes
3
Rearrangement of an oxyallyl cation
28
Explanation for the trends in nucleophilicity—Orbital interactions or electrostatic attraction