Do I have to consider the water in the hydrate of a salt in a mass percent calculation?

As well, I don't fully understand what the $\ce{6H2O}$ in the molecular formula means? Does it just mean that it is aqueous?

Any clarification would be helpful!

As well, what would be the name of that compound? Would it just be Ammonium Magnesium Orthophosphate? Or would it be something else because of the $\ce{6H2O}$?

As stated in one of the comments to your question, the waters of hydration constitute part of the crystal structure itself, just as much so as the rest of the molecule. You can somewhat think of the waters as being functional groups of the compound. For example, the dehydrated form of a compound can have very different chemical and physical properties than the hydrated form. The presence of waters of hydration in no way means that the compound is aqueous or dissolved in water.

Thus, when calculating the mass percentage of hydrogen of the hydrated compound, you do include the hydrogens from both the waters of hydration and the rest of the molecule.

The common name of $\ce{NH4MgPO4⋅6H2O}$ is magnesium ammonium phosphate or struvite. According to this Wikipedia article:

Struvite (magnesium ammonium phosphate) is a phosphate mineral with formula: $\ce{NH4MgPO4·6H2O}$. Struvite crystallizes in the orthorhombic system as white to yellowish or brownish-white pyramidal crystals or in platey mica-like forms. It is a soft mineral with Mohs hardness of $1.5$ to $2$ and has a low specific gravity of $1.7$. It is sparingly soluble in neutral and alkaline conditions, but readily soluble in acid. Struvite urinary stones and crystals form readily in the urine of animals and humans that are infected with ammonia-producing organisms.

Here is a photograph of struvite crystals from the same article: 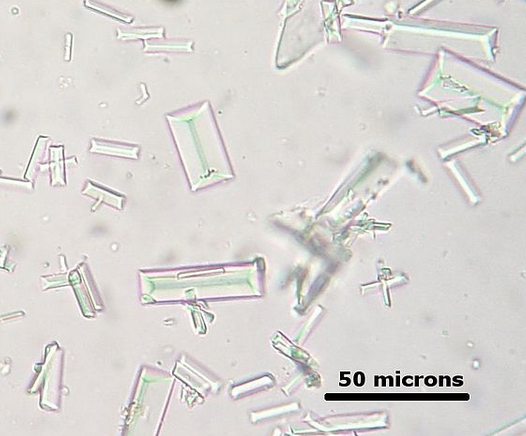 Not the answer you're looking for? Browse other questions tagged water stoichiometry or ask your own question.