The formula for the cyanide ion is $\ce{CN-}$. That gives us a total of ten valence electrons to work with. There are two obvious ways to build the Lewis structure.

(I hope that was clear. I'm not sure how to make ASCII Lewis structures. In that second example, the nitrogen has two lone pairs.)

My understanding is that when formal charge cannot be avoided, negative formal charge should reside on the most electronegative atom.

Which rule takes precedence over the other? Using cyanide as an example, should I:

Which rule takes precedence over the other? Using cyanide as an example, should I:

You should treat them as resonance structures (both are valid Lewis structures, they have the same connectivity of atoms, and they are related by one of the usual electron-pushing operation, i.e. double bond turning into single bond and lone pair).

Then, you can look at the other rules to make a guess which resonance structure should have higher weight. The octet rule takes preference over the formal charge rule: 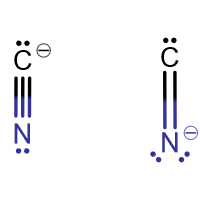 The structure on the left follows the octet rule for both atoms, whereas the one on the right has only six electrons associated with the carbon atoms. So if you only want to write a single Lewis structure, the one on the left is better. If you have space, write the pair of resonance structures with a double arrow ($\ce{<->}$) between them. 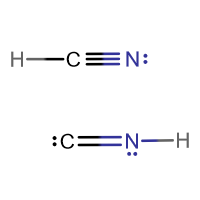 Not the answer you're looking for? Browse other questions tagged electronegativity lewis-structure formal-charge or ask your own question.