Is it possible to have a dispersion interaction with no inductive interactions?

In symmetry-adapted perturbation theory, the interaction energy of a non-covalently bound pair of molecules (it could be done to arbitrary order but is usually just pairs) is built up from a perturbative expansion of the interaction potential between two monomers.

My question is, can that second-order perturbation term--dispersion-- have a non-zero contribution to the total energy while the first-order induction terms do not contribute?

When I imagine this situation physically, it doesn't make much sense because it means that the presence of monomer A near monomer B does not perturb the eigenstates of monomer B (beyond electrostatics, exchange, etc.) and vice versa, but somehow there is a mutual dispersion effect.

So basically what I'm asking is if it is mathematically possible to have a non-zero dispersion term while simultaneously having zero contributions from the first-order induction terms in the interaction potential expansion?

I don't know too much about the details of what I'm asking about, so if I've said something quite stupid please let me know.

What sets the dispersion energy apart from the induction energy is that it is the simultaneous polarization of both monomers, and so the integrals run over the virtual orbitals of both monomers as in $$ E^{(2)}_{disp} = \sum_{i\neq 0} \sum_{j\neq 0}\frac{|\langle 00|V|ij \rangle|^2}{E_{00}^{(0)}-E_{ij}^{(0)}} $$ Mathematically, the dispersion and induction terms are both second-order correction terms in the energy expansion, but they have been grouped in a physically-intuitive way to give two different types of interactions. There are systems where dispersion is the dominant interaction, such as rare gas dimers.

An example of a dispersion-dominated bound system is the neon dimer. Below is the SAPT decomposition of the binding curve at the HF-SAPT(2)/aug-cc-pVDZ level. 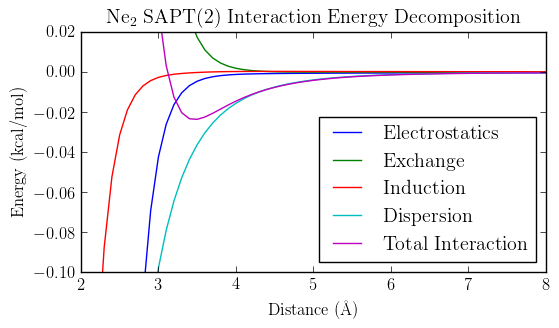 At the equilibrium distance, dispersion dominates the binding interaction but there is a non-zero induction contribution. I am inclined to say that although the ratio of dispersion and induction may become large, you can never truly have zero induction. Some naive mathematical reasoning follows.

Not the answer you're looking for? Browse other questions tagged theoretical-chemistry intermolecular-forces or ask your own question.

28
Suggest methods and basis sets for a variety of systems
36
Natural Bond Orbital analysis: Significance of stabilization energy determined by 2nd order perturbation
2
What is the connection between vapor pressure and intermolecular force explanations of boiling?
1
Why do ethanethiol molecules have stronger London dispersion forces than those of ethanol?
2
Dispersion forces - what determines which molecule will have its electron cloud repelled?
3
What is the potential to use for non-dispersion interactions?
12
What is it that is "symmetry-adapted" about symmetry-adapted perturbation theory?
6
On the spin-adaptation of 2nd order Møller-Plesset perturbation theory