Why does acetanilide gives exclusively para isomer. I know that -I of nitrogen must decrease the yield of ortho product, but still it should be made in accountable amounts. Where am I going wrong. I am inserting the question and solution screenshots for reference. The question is from IIT JEE 2016 exam, chemistry section of paper 1 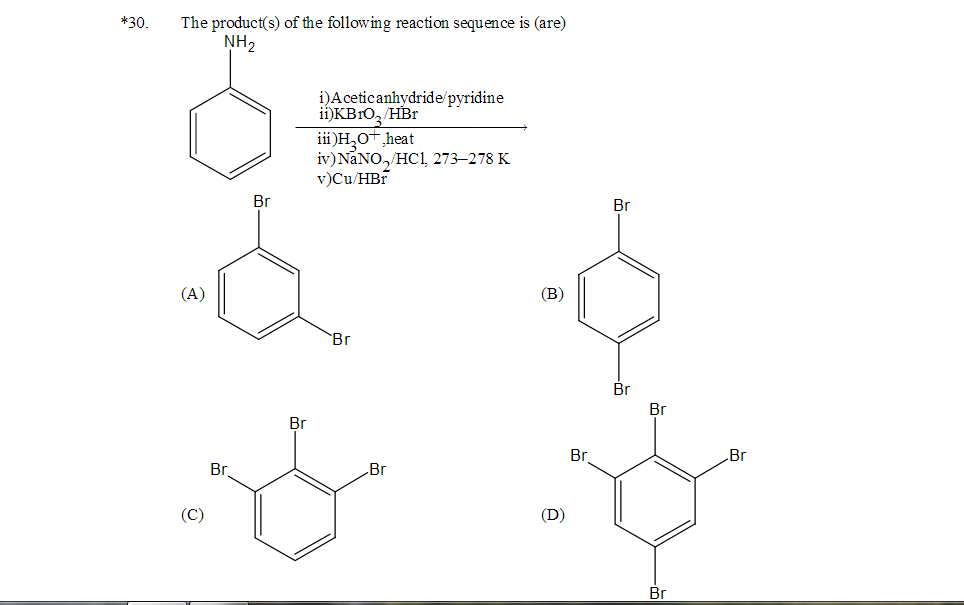 One reason: 1,3-allylic strain of the amide group hindering attack at the ortho position. However, I still find it amazing that there is exclusively no byproduct formed. Most aromatic brominations (mostly with NBS) I did required cooling to -78°C and then slowly warming up to room temperature to prevent extensive formation of multiply brominated side products. By the way, the $\mathrm{BrO_3}/\mathrm{HBr}$ combination is used to generate $\mathrm{Br_2}$ in situ thereby leaving the concentration of elemental bromine at a bare minimum. This prevents the formation of polybrominated site products. A similar protocol is $\mathrm{KBr}$/oxone. However, the question is clearly ill-defined as one should have provided the fact that 1 eq of $\mathrm{BrO3}/\mathrm{HBr}$ is used. If you would have used more equivalents, chances are good you would have gotten (d) as well.

Also, I find the description given in (http://websites.rcc.edu/grey/files/2012/02/Bromination-of-Acetanilide.pdf) questionable, I think that the main point for the high regioselectivity is the use of $\mathrm{BrO3}/\mathrm{HBr}$ and not the steric hindrance of the amide. I did bromination on aromatic amides as well and regioselectivities were not that much higher at all, in my experience.

Turning the amino group into an amide serves two purposes:

Especially the second transformation will greatly reduce the reaction rate. Furthermore, a bromine atom is mildly deactivating, too, due to its $-I$ effect (the weak $+M$ effect is neglegible and only responsible for the ortho/para directing abilities). Thus, it is very likely that we can selectively stop the reaction after monobromination.

The question still arises why we only obtain the para-product. Obviously the amide behaves much like a bromide and displays a weak $+M$ effect in spite of the amide resonance. Yet we can imagine the the proximity to the bulky amide group inhibits substitution at both ortho-protons sufficiently to allow isolation of the para-product.

Not the answer you're looking for? Browse other questions tagged reaction-mechanism aromatic-compounds halides or ask your own question.

5
Predicting the product of bromination of acetanilide