The mechanism for phosphoglucose isomerase changing glucose 6 phosphate to fructose 6 phosphate shows histidine protonating the c5 oxygen and lysine deprotonation the c1 oxygen to form an open chain aldolase. Glutamic acid then deprotonates c2 to create an enediol intermediate and donates the proton to c1. For the proton to be transfered from c1 to c2 the c1 oxygen needs to be protonated and the c2 oxygen deprotonated. Does anyone know of a source that specifies the amino acid residue or residues that facilitate the deprotonation and protonation of the c2 and c1 oxygens?

tl;dr: The active site catalytic residues (BH+ and B’) are thought to be Lys and a His–Glu dyad, respectively. These facilitate the abstraction of proton from C2 and subsequent protonation on C-1.

Some important points to note:

A proposed reaction mechanism for the Phosphoglucose Isomerase reaction involves general acid–base catalysis by the enzyme: 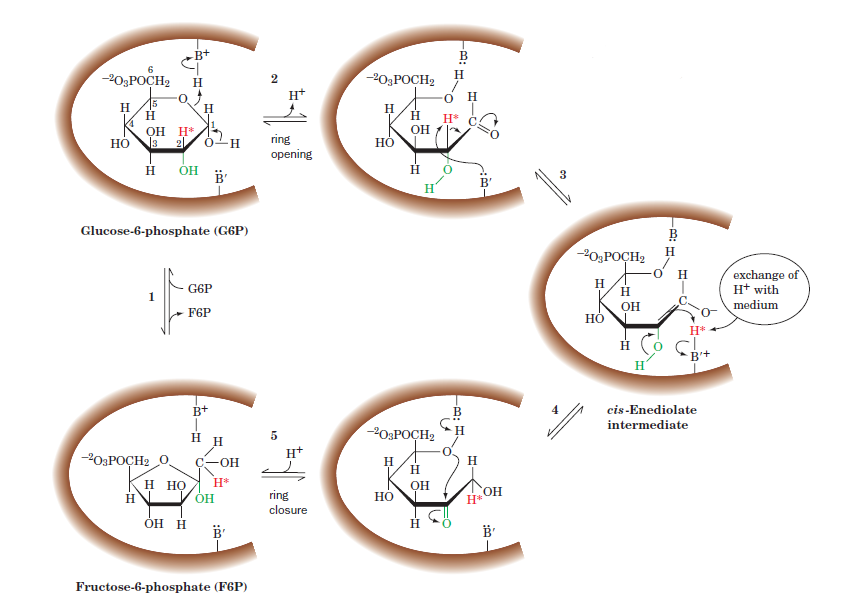 Not the answer you're looking for? Browse other questions tagged biochemistry carbohydrates enzymes or ask your own question.