Is there any special rules for checking the aromaticity of polycyclic compounds?

This question arose in my mind because it's given in a book that pyrene is aromatic. How can it be with 16 π electrons? So, it should be actually anti-aromatic or is there any special rule for these types of compounds? 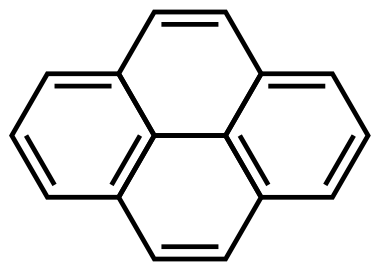 First, Hückel's rule is only valid for monocyclic systems:

Hückel's rule is not valid for many compounds containing more than three fused aromatic nuclei in a cyclic fashion. For example, pyrene contains 16 conjugated electrons (8 bonds), and coronene contains 24 conjugated electrons (12 bonds). Both of these polycyclic molecules are aromatic even though they fail the 4n + 2 rule. Indeed, Hückel's rule can only be theoretically justified for monocyclic systems.

Pyrene is a commonly used counter-example of Hückel's rule. A refinement specific to Polycyclic Aromatic Hydrocarbons (PAH) is Clar's rule.

The case of pyrene is explained in detail in the literature by a 2007 paper in Petroleum Science and Technology:

This representation agrees with Clar’s sextet rule in which the molecule is represented as having two aromatic sextets, one for each of the rings a and d, and two fixed double bonds on rings b and c (Hernández-Trujillo et al., 2005). 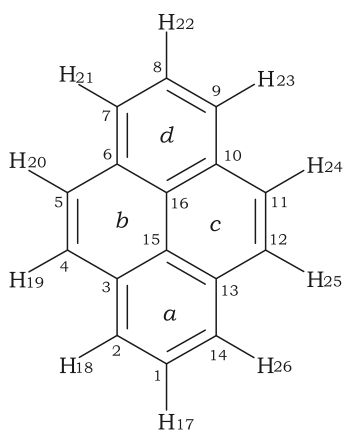 You can find the answer in:

It is based on the kind of conjugated circuits within the set of Kekule valence structures. If all conjugated circuits are of size 4n+2 (as the are in pyrene and all benzenoid hydrocarbons and a number of nonbenzenoid systems (like azulene and other) molecular is aromatic.

If molecule has 4n+2 and 4n conjugated circuits it is at best partially aromatic (which includes also buckminsterfullerene C60).

If it has only 4n conjugated circuis (as cyclooctatetrane) it is not aromatic.

It isn't just multiple ring systems where things get muddied up. It happens also with a ring where there is a pi-bonded substituent like cyclopropenone.

In the case of cycyclopropenone we often suppose that the carbonyl group with its electronegative oxygen atom is polarized or zwitterionic, as $\ce{C^{+}-O^{-}}$, making the ring aromatic with two pi electrons. Cyclopropenone and its derivatives have properties consistent with at least some contribution from an aromatic zwitterion structure.

But if we replace the oxygen with something else the picture is not so clear. Where do we draw the line with respect to electronegativity and possibly resonance structures?

Some ideas may be gleaned from this reference, which suggests that a pendant oxygen atom (e.g. cyclopropenone) may be considered electronegative, a metthylene ($\ce{CH2}$) group (fulvenes) is essentially neutral making the molecule nonaromatic, and a pendant carbonyl or diazo group (e.g. ketocyclopentadiene, diazocyclopentadiene) will actually be electropositive through resonance.

19
Is [7]сirculene aromatic or anti-aromatic?

3
Difference between any arene and an aromatic compound?
46
Is buckminsterfullerene aromatic?
2
Aromaticity of 1,1'-bi(cycloprop-2-en-1-ylidene) and 1,4-dioxine