How does the composition of ice differ from that of water in a partly frozen solution?

Take any solution, then start freezing it at sufficiently low temperature. Soon a small amount of ice forms. I'd like to know how the composition of dissolved salts and gases in the bit of ice differs from that in the water that's still liquid.

Assume that the solution is far from saturation and whatever other extreme conditions there can be. I don't have any particular solution in mind - it's the general principles that I'm interested in.

It sounds like you're talking about freezing-point depression. If the solid component of a system is pure (oft assumed so; crystals are good at excluding impurities), the equilibrium is shifted because the chemical potential of the solution drops.

For a system with two pure species, the chemical change from say, water ($\star$ denoting pure) to ice is in equilibrium when their chemical potentials (denoted $\mu$) are equal:

Note: Chemical potentials are always dependent, to varying degrees, on both temperature and pressure, so I'm not going to bother writing $\mu(T, P)$ everywhere

On the following graph that's at $T_0$; the usual freezing point of water where the "pure water" and "ice" curves intersect. If water exists at a temperature lower than $T_0$, its higher chemical potential translates to a higher free energy, so it's thermodynamically driven towards freezing. 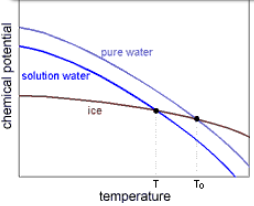 (image source: a website that is currently down; retrieved via the Web Archive)

Originally, the fraction was $1.0$ (it was pure), and because $\ln1 = 0$, that term was ignored. But now, because some of the solution species is something else, $\chi_i$ drops, thus $\ln\chi_i$ becomes negative, so the term lowers the overall chemical potential. Because the chemical potential is lower, its free energy is lower, so it is thermodynamically more stable at lower temperatures. At some $T$, we will find that:

And there, the two species will be in thermodynamic equilibrium.

For more, check this site, or Wikipedia articles on chemical potential and freezing point depression (a basic Physical Chemistry text book, or chapter in a Gen. Chem. one might be better; the WP articles are not that great to get started with).

Not the answer you're looking for? Browse other questions tagged aqueous-solution or ask your own question.

3
How might one reduce the concentration of bubbles in their ice, from ice cube trays?
0
Why is the water column empty in ICE table
0
How can you infer that density decreases when ice melts from the water phase diagram?
1
Why does the composition of Ocean Water list sodium and chloride separately?