My partner is pregnant, and thought perhaps she was going mad when one day she found our toilet seat had turned blue. After some investigation, it seems this is a real phenomena, see here for a nice example, with the image from this link shown below. 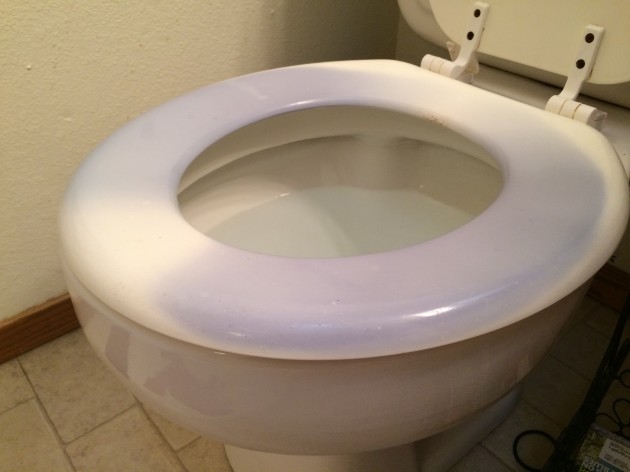 One explanation suggested is dye transfer from new maternity jeans, however we find this unlikely for a variety of reasons:

The phenomenon is also described as possibly relating to taking certain pharmaceuticals for Crohn's disease. My partner happens to take (Sulfasalazine) which is used for this (although it's not what she's taking it for) and she's never encountered this before, despite taking them for some time. Another suggestion we've seen is that it is from the dye in a batch of pregnancy vitamin tablets she's started taking, which are indeed blue, although, she's also been taking these daily for a month or so.

However, we don't know the answer, and these are just ideas, so why has our toilet seat turned blue?!

The question cannot be answered without a chemical analysis.

However, given that there exist toilet seats with silver based anti-microbial coatings, the bluish grey color may come from metallic silver particles produced by a reduction process similar to the photographic development process.

You could proof the presence of silver by applying Caffenol, an alkaline aqueous solution of instant coffee, washing soda, and vitamin C (ascorbic acid) to the toilet seat. I suggest to use Caffenol-C-M whose preparation is described here. Let the Caffenol react on the toilet seat as long as possible. If grey or black stains are formed that persist after cleaning, your toilet seat contains silver with high probability. Note that the stains cannot be removed anymore.

If the test is positive, the next step would be to investigate why your pregnant partner has reducing powers.

I do not know the chemical process. I do know it is triggered by a change in hormone levels and appears to be more extreme when vitamin b levels change as well. Chromhidrosis is a condition that causes visibly blue sweat. However, you would see blue staining on her clothing and bed sheets as well. Hormone changes can cause temporary pseudochromhidrosis. This condition produces clear sweat which reacts with certain surface bacteria and the result on some surfaces is blue/purple staining. Only an acid based cleaner will remove it.

14
Why do some materials turn black and others white after combustion?
1
Why does my filtered water turn thick and almost slimy when refrigerated?
28
Why did the Rio 2016 pool water turn green?
15
Why does paper turn yellow over time?
10
Why does internal combustion engine smoke appear blue? Could there be "blue molecules" in it?
9
Why do purple Pedialyte freezer pops turn green when frozen?