Confused about the direction in which the bond will break 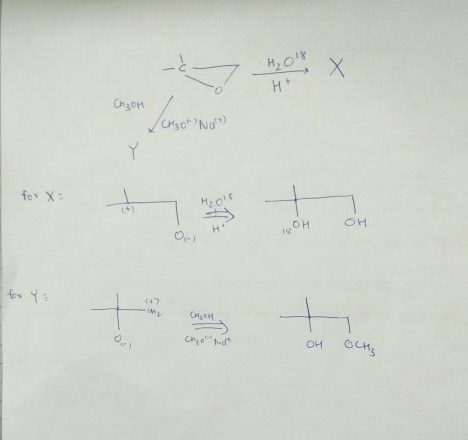 Why does the bond break in different fashion in the two cases?

For case X, a 3° carbocation is formed, bit why isn't this the scenario for case Y?

organic-chemistry reaction-mechanism
Share
Improve this question
edited May 22 '21 at 21:35

The reactions happen on different centres because they follow different mechanisms.

Epoxides are actually surprisingly stable. They don’t undergo spontaneous ring-opening reactions by themselves unless the oxygen atom has been protonated previously. That is what the $\ce{H+}$ in reaction path X is there for. After having protonated the oxygen, the ring-opening reaction is charge-neutral and thus releiving the Baeyer strain to generate a tertiary (more stable) carbocation is favourable. This carbocation can be captured by a nucleophile in an $\mathrm{S_N1}$-type mechanism.

This does not happen under basic conditions as removing a negative charge would not help the epoxide opening. However, under these conditions solvent molecules such as methanol are easily deprotonated creating much better nucleophiles. These nucleophiles are then able to attack the epoxide under $\mathrm{S_N2}$ conditions. Hereby, an anion attacks a neutral molecule to generate an anion, so the ring-opening is again charge-neutral. However, $\mathrm{S_N2}$ attacks are more likely to happen on less hindered, primary carbons.

51
Regioselectivity of acid-catalyzed ring-opening of epoxides

4
Confused about carbocation stability
2
Prins reaction mechanism
6
Does rearrangement occur in Friedel Crafts alkylation or not?