My textbook begins the Chemical Kinetics section by describing the "Initial Rates Method" of determining the rate of reaction. I understood it as the following (for a first order reaction): $$\ce{A -> B+C}$$ $$\text{rate}_\mathrm{i}=k[\ce{A}]_\mathrm{i}$$

The subscript $\text{i}$ shows that it is the initial rate. This I agree with, as it is suggested by experimental data. However, on the next page, the textbook makes a leap and (implicitly) states that this relationship holds at any time: $$\text{rate}=-\frac{\mathrm{d}[\ce{A}]}{\mathrm{d}t}=k[\ce{A}]$$ This becomes a differential equation, the justification for which the textbook did not provide. How do we know that the change of concentration with respect to time depends on the concentration itself? I don't see how this can be assumed from the initial rates method.

When we talk about the rate of a reaction, we mean the rate at which the products appear. This means that it is also equal to the disappearance of the reactants. So, when we quantify the rate in terms of reactants, they must be in opposing magnitude. $$\text{rate }= \frac {\Delta [\text{product}]}{\Delta t}=-\frac{\Delta [\text{reactant}]}{\Delta t}$$ 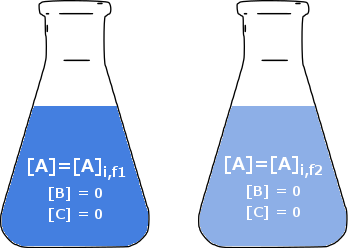 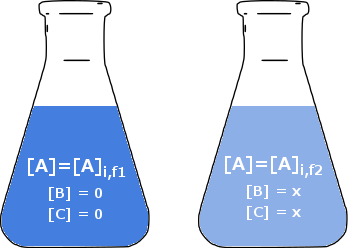 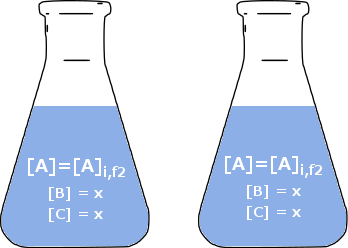 is just a particular situation. We cannot know a priori if a reaction that obeys (2) will obey (1). We can only measure how $r(t)$ varies over time. If $r(t)$ follows equation (1) then it is said that the kinetics follow a first-order equation.

In chemical reactions of the type $\ce{A -> B + C}$ it is natural to expect a first order reaction at initial times. As long as the reaction doesn't need any other molecule or agent in the medium (aside from perhaps other essentially constant factors) than $\ce{A}$, and doesn't involve collisions between two or more molecules to ignite the reaction, one can expect the rate to be proportional to the number of molecules present at each time, hence to $[\ce{A}(t)]$.

After a long time, when the reactive concentration is depleted and the concentration of the products builds in (assuming no diffusion of the products) the first order law is typically violated, since the back reaction $\ce{B + C -> A}$ (aside from other collisions) can occur. In particular, is is not possible to reach equilibrium conditions under the first order law.

3
How to Determine the Rate Law knowing time and concentrations
2
Suggest a method, other than spectrophotometry, for determining the reaction rate
7
Finding rate of reaction from a concentration vs. time graph
1
How to calculate the rate constant of a zero order reaction?
5
Determining Rate Law and Reaction Mechanism from Method of Initial Rates
1
Help with determining the rate constant of a reaction
0
For a 1st order reaction, how do you derive the integrated rate law for a product versus time?
4
Correct Rate Equation for a Reversible Reaction