What exactly is a mole?

Upon coming back to University I've started studying basic chemistry again. I've always had trouble with the concept of "moles". According to my study book,

1 mole of any element or compound is equal to its molecular weight in grams.

I understand that part but later in the paragraph it also says:

The first thing to realize is that "mole" is not a mass unit. It is simply a quantity - a number - like dozen or gross or score. Just as a dozen eggs is 12 eggs, a mole of glucose is $6.02 \times 10^{23}$ glucose molecules, and a mole of carbon atoms is $6.02 \times 10^{23}$ carbon atoms. "Moles" are only associated with mass because individual objects have mass, and thus a mole of objects also has a certain mass.

Perhaps a hardware analogy might help. Let's say you're in the business of putting things together using nuts, bolts, and washers. For the sake of argument, let's say that whenever you join something you always need one bolt, two washers, and one nut. Oh, and you're going to be bolting together a lot of stuff.

So, you're going to need a lot of nuts, bolts, and washers, but that's okay, the hardware store sells them by the pound.

The bolts have a mass of 20 carats, the nuts are 5 carats and the washers are 2 carats. What's a carat? Doesn't matter really because you don't know how much stuff you're going to be joining - just "a lot".

So, you go to the hardware store and you buy 20 pounds of bolts, 5 pounds of nuts and 4 pounds of washers.

Now, you have no idea how many nuts, bolts and washers you have, but you do know that you have the same number of nuts as you have bolts and you have twice as many washers. So long as you convert the mass of the item in carats to the weight you buy in pounds, you can always make sure you get the items in the proportions you want.

If you relocate to a country with a metric system and their hardware stores sell the same bolts, nuts, and washers but by the kilogramme (heresy!), are you in the least bit phased? Nah. You buy 20 kg of bolts, 5 kg of nuts and 4 kg of washers. Now you have 2.2 x 6,000 lots of joiner uppers. So, you're still in business.

The idea with atoms is basically the same, when you convert the mass in amu (or the dalton as I believe is preferred now) to grammes, then the mole is NA or Avogadro's number 6.02 x 1023.

The precise definition of exactly what is an amu (Da) is a fine point, important, but tangential to the concept of the mole which is what you're struggling with. Interestingly, and equally tangentially, Avogadro's number may well be used to redefine what a kilogramme is: https://www.youtube.com/watch?v=ZMByI4s-D-Y

Atoms combine on a particle by particle basis. That is, by numbers of particles.

The mole is the bridge between these. It allows us to "count out" a particular number of atoms by massing the substance.

The first point is that it is a definition. In practical terms it enables us to have a convenient unit to express concentrations as $\pu{mol dm^{-3}}$ without having to use huge numbers. More importantly it allows us to know how many atoms molecules etc. are in a given mass of substance.

A mole is defined as the amount of substance, n, that contains as many objects (atoms, molecules, ions for example) as there are atoms in 12 grammes of carbon-12. This number has been determined by experiment and is approximately $6.02214~10^{23}$. This is Avogadro's number.

The mass of one mole of a substance equals its relative molecular mass expressed in grams,

Avogadro's Number was chosen so that the mass of a mole of molecules (of the same thing) happens to equal $x$ grams, where $x$ is the molecular mass of that thing. Originally, it was defined so that 1 mole of hydrogen (which, remember, is really "1 mole of hydrogen atoms") weighs 1 gram. Nowadays, we define it so that one mole of Carbon-12 (again, "1 mole of Carbon-12 atoms") weighs 12 grams, but the proportions still work out, more or less. The folks behind SI are working on pinning this to a mathematical constant.

Since I rely on my chemistry textbook,so I am gonna provide you the knowledge about one mole I have gained through it.

Let start with some macroscopic objects.

I.e. if we take heavy objects in massive-amount, and lightweight objects in lighter amount; the number of objects of both cases, would tend to same.

Avogadro number (N.A.) in this example working the same way as X in previous brick example.

Here is a simplified diagram comparing real-life example and chemistry-example. 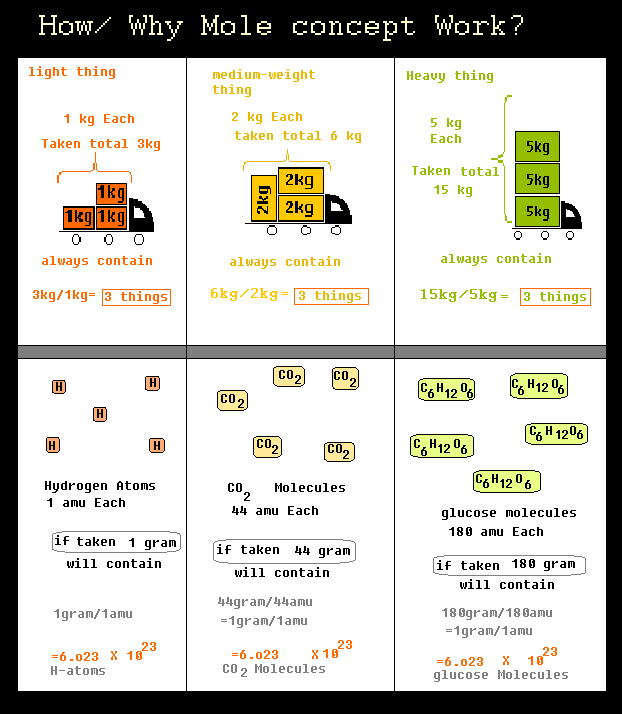 The numbers at left side of compound's formula, or the stoichiometric coefficient; is smallest possible number of molecules to complete a reaction.

we're given certain amount of glucose, and asked for amount of CO2 evolved after complete combustion in O2 ?

We can calculate that freshly from a.m.u. Larger calculation.

But mole concept help a lot since we can determine quantities of reactants and products directly in gram, from molecular formula and stoichiometric coefficients, without using any unit conversion between gram and a.m.u.

If we could multiply the whole reaction

once we knew the fact instead molecule we could use mole; and we could easily write reaction for a mole parallel reactions. Then we convert between moles to gram using the chemical formula, we can easily determine the required or obtained amount of certain reactant or product. For a certain given value of 1 reactant or product

-4
Atoms vs molecule when talking about the avogadro's number?
0
Why convert to moles for stoichiometry calculations?

2
What is a mole?
9
Is “amount of substance” the same thing as “number of moles”?
4
Effect of redefining Avogadro's constant and kilogram on molar mass