If it can be defined, do the electrons in outer shells than that shell have any impact on the shielding effect?(They too must repulse the electron in the inner shell, possibly helping the nuclear attraction) If not, why?

Can someone help me out? Tks

Generally, inner electrons shield outer electrons. In order to shield you have to be closer to the nucleus, but it's harder for an electron in a higher energy orbital to be closer to the nucleus than an electron in a lower energy orbital. Therefore the shielding effect from inner on outer is a lot more pronounced than outer on inner.

If you look at the formula of effective nuclear charge,you will see that Z*= Z-S {Where Z is the number of protons in the nucleus (atomic number) and S is the average number of electrons between the nucleus and the electron in question }

Now your next question is Do the electrons in outer shells than that shell have any impact on the shielding effect? the answer is NO 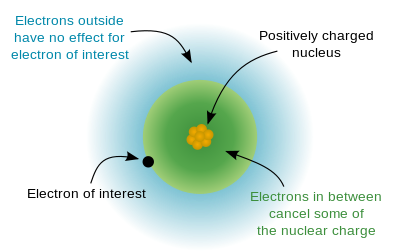 According to wikipedia(as shown in the image) electron in the higher energy levels do not contribute in anyway to sheilding effect.

Not the answer you're looking for? Browse other questions tagged periodic-trends or ask your own question.

7
Why does attractive forces of nucleus increase more than shielding across groups?
6
Order of positive mesomeric effect of halides
12
Why does screening effect decrease due to d-orbital?
5
Why does ionization energy increase as we go from left to right in a period?
1
Periodic Trends of Zeff and Electronegativity
3
How can an electron shield another electron of the same subshell?