Carboxylic acids such as acetic acid are capable of forming dimers:

I'm wondering why alcohols like ethanol don't generally form dimers. In the diagram below, the oxygen atom on the left ethanol molecule should be capable of accepting a hydrogen bond from the partially positive $\ce{H}$ atom on the right ethanol molecule. Does it have something to do with the $\ce{-OH}$ bond angle? 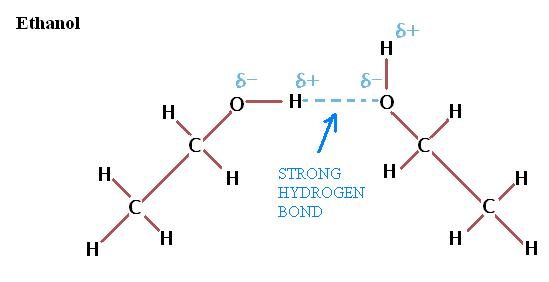 The strength of a hydrogen bond somewhat depends on the $\ce{X-H\bond{...}X}$ angle that the hydrogen-bonding hydrogen forms with the two electronegative elements $\ce{X}$. In our case, carboxylic acids or alcohols, $\ce{X} = \ce{O}$ so the angle is $\ce{O-H\bond{...}O}$. The ideal angle for this fragment is $180^\circ$.

As you have drawn for carboxylic acids, it is very easy to allow this linear arrangements. If you wish, you could describe the entire $\ce{(R-COOH)2}$ feature as a benzene-like ring streched in a single direction. Most importantly, the acceptors and donors line up nicely, the carboxyl function features an angle of $120^\circ$ and the $\ce{C-O-H}$ angle (and the $\ce{C=O\bond{...}H}$ one!) is also close to $120^\circ$. These arae the theoretically predicted, unstrained angles.

For two alcohol (e.g. ethanol) molecules to attempt a similar arrangement, we would end up with only four atoms that have to form a rectangle with $\ce{O, H, O, H}$ at the four corners. Thus, the $\ce{O-H\bond{...}O}$ hydrogen bond angle would be much closer to $90^\circ$ — a very bad arrangement. Furthermore, this would put the two electronegative oxygens (which thus feature a negative partial charge) closer together with nothing in-between which would cause destabilisation due to like charges approaching. The hydrogen-bonding hydrogens cannot alleviate this unfavourable interaction since they are at the corners of the square.

The situation for alcohols is much better if they create a network of a number of molecules that allow for much more favourable angles. With four molecules, you could already create a cyclic structure of approximately $100^\circ$ $\ce{H\bond{...}O-H}$ angles and $170^\circ$ $\ce{O-H\bond{...}O}$ angles — much more favourable. Of course, in the actual solution this number will fluctuate strongly as hydrogen bonds are broken and reformed constantly and different ring sizes happen all the time.

Here are some data for the comparable systems of copper/ethylenediamine $\ce{Cu(en)_2^2+}\ (\ce{en}=\ce{H2NCH2CH2NH2})$ and copper/methylamine $\ce{Cu(CH3NH2)_4^2+}$. Here, I am presenting the overall formation constants $\beta$ (whcih are the products of the equilibrium/formation/binding constants of each individual association step). The formation constant for $\ce{Cu(en)_2^2+}$ is higher than for $\ce{Cu(CH3NH2)_4^2+}$ by a factor of $\sim 10^4$, which corresponds to the chelated complex having a more negative free energy of binding by 23 kJ/mol. The major component in this lower energy state is entropy. Data from here.

It's all a matter of relative energies. Carboxylic acids form two aligned hydrogen bonds, so the $\Delta E$ associated with this process is fairly negative. There's also some extra electron density on the carbonyl O that likely contributes to a better hydrogen bond. Now, alcohols can form one hydrogen bond. You almost certainly make the hydrogen bond in solution, but any collision from a solvent molecule could break the hydrogen bond.

Edit: Apparently, my answer was not clear. No, the bond angle is not the problem.

The main reason for the higher extend of H bonding in carboxylic acids is due the higher acidity of the carboxyl group (e.g. ethanol: $~\mathrm pK_\mathrm a = 16$, acetic acid: $~\mathrm pK_\mathrm a=4.5$) making it a good hydrogen bond donor, and the ability of the carbonyl oxygen to act as a good hydrogen bond acceptor. Thus the extend of H bonding can be explained solely based on acidity/basicity arguments. Compared to that a hydroxide is just too basic to be formed out of the hydroxyl group, so hydrogen bonded dimers of alcohols make no sense. What is also important to point out, is that the resulting dimer will be completely symmetric (due to resonance) making the situation energetically even more favourable.

Not the answer you're looking for? Browse other questions tagged organic-chemistry alcohols hydrogen-bond or ask your own question.

2
H-bonding in methanol and methoxyamine
4
Are gem-diols on alkenes stable?
4
Reasoning retention factor of benzoic acid
1
Why aren't the hydrogen bonds in carboxyllic acids like this?

23
Reason for the stronger acidic property of phenol than alcohol
0
What are some of the simplest chiral molecules in biological systems
3
Draw a simplified MO diagram for the pi system of Methyl vinyl ether
2
Mixing solvents and other compounds - safety issues
6
Difference between oxygens in a carboxylic acid?
2
What is the reason for the acidic character in phenols?
10
Obtaining activity coefficients of conjugate acids of some common carboxylic acid molecules
7
Oxidation of an aldehyde - how is this a loss of electrons?
5
Can =NH2+ in Arginine's side chain form hydrogen bonding at physiological pH?