What substance(s) will prevent superglue from hardening in its tube?

Superglue often sets in the tube, so I was wondering if ethanol or even water could stop it from hardening and going to waste. Ideas, anyone?

organic-chemistry everyday-chemistry polymers
Share
Improve this question
edited May 2 '17 at 8:53

Based on what I gathered from this Wikipedia article on super glue :

Super glue is typically composed of a class of compounds called cyanoacrylates.

The chemical structure of methyl-2-cyanoacrylate: 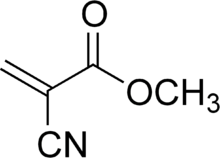 Polymerization is known to occur for a number of reasons, and can follow a number of pathways. (So to keep this brief, I'll just skim over how methyl-2-cyanoacrylate polymerizes). Wikipedia provides the following mechanism:

Over there, the Nu bit is a common abbreviation we use for a nucleophile in chemistry. It is the presence of a nucleophile, that catalyzes the polymerization of methyl-2-cyanoacrylate.

So when you squeeze out a little superglue, how does it harden? Air around you, as well as the surface you're applying the superglue on will, inevitably, have trace quantities of water. To a small extent, water splits to provide positively charged hydrogen ions (essentially, it's just a proton) and negatively charged hydroxide ions (OH). It's the hydroxide ions that play the role of the nucleophile in the above-depicted mechanism.

So ironically, when super glue "dries out", it just transiently combined with (a part of) a water molecule. That is, as @MaxW points out in the comments, water catalyzes the "drying" of superglue.

Since it's water that causes superglue to harden/set, manufacturers go all out to make sure the packaging is water/air-tight. Ever noticed, that when you buy a tube of superglue, it has a seal at the mouth which you've gotta pierce before you can use it? That seal is what prevents the glue from drying out while it's still in the (unopened) tube. Once you pierce the seal, it's only a matter of days before a sufficient amount of water (courtesy: Atmospheric moisture) manages to seep in and render render the remaining superglue useless.

Note that in case of superglue, the manufacturers don't (typically) add anything to keep the superglue from drying...they just put on a seal and cross their fingers. Whereas your typical liquid/PVA glue is a water based emulsion. When PVA glue is squeezed out of the tube and onto a surface it, literally, "dries out" by losing water.

Once superglue is set, it is set... there's no turning back O:)

You can't revert it to usable superglue through any (simple) means.

However, since you now know that it's water that's responsible for superglue "hardening", if you want to make the superglue left in the (opened) tube last longer, store it an an air tight jar that's been packed with a desiccant, like silica gel ;)

This MSDS is available from Super Glue Corporation / Pacer Industial. It states that their superglue ranges from 85% to 100% ethyl-2-cyanoacrylate, which is soluble in acetone.

While it is also soluble in several other organic solvents, 99% acetone is available at you local pharmacy and clearly the most readily available and affordable to try.

Just to be clear, the solution here is to get past any of the glue that's already hardened so that you can still use the remaining glue.

Once it's hard, it will not work as glue again, and pre-mixing with acetone or anything else to prevent hardening will prevent it from working as glue in the first place.

Not the answer you're looking for? Browse other questions tagged organic-chemistry everyday-chemistry polymers or ask your own question.

6
Alternative PCB etching solutions - Is KMnO4 or NaClO suitable oxidizer?
21
Why does milk overflow when boiled?
15
What causes the “white water” smell?
1
Cheap silocone casting resin (1 or 2 component resin)?
1
What is a laboratory set-up for the synthesis of ethanol from ethene?
7
Why are regular plastic bags not smell-proof?
0
Ethanol discolored yellow when stored with a rubber stopper. Forming fine white precipitate when added to water
6
Recrystallisation of dibenzylideneacetone