The starch and iodide test is to detect amylose, a polysaccharide. We add an iodide solution to a sample and observe a color change with the starch; it turns dark blue.

While researching information online, I understood that $\ce{I_{2}}$ is not soluble in water, hence it needs to react with iodide ions present to at least create $\ce{I_{3}}$, which is soluble in water, and also forms polyiodide complex, as research shows. I also understood that this linear molecule of iodide migrates to the center of the helicoid polysaccharide structure. Then, with some electronic interactions, there is a modification in the electron configuration which produces the dark blue color.

The amylose present in starch is responsible for the deep blue colouration. The structure of amylose consists of long polymer chains of glucose units connected by an alpha acetal linkages. All of the monomer units are $\alpha$ -D-glucose, and all the alpha acetal links connect $C1$ of one glucose and to $C4$ of the next glucose.

As a result of the bond angles in the acetal linkage, amylose actually forms a spiral structure.

X-ray diffraction studies$^{[1]}$, demonstrate that the amylose is organized as left-handed helices, which have outer diameters of 13 Å and a pitch of 8 Å, with each turn of the helix corresponding to six 1,4-anhydroglucose units. The iodine components are linearly arranged in the 5 Å wide inner cavity of the helices with an $\ce{I–I}$ distance of approximately 3.1 Å.

Starch-iodine complexes show dichroism of flow$^{[2]}$, i.e light with its electric vector parallel to the flow lines is more strongly absorbed than light with its electric vector normal to the flow lines. The dichroism of flow is shown to require that the long axes of the iodine molecules in the complex be parallel to the long axis of the starch iodine complex.

The exact structure of the polyiodide chain remains contentious, however, the following species are commonly implicated as key elements of the substructure:

So, ignoring the structural specifics of the polyiodide chain, one notes that if an iodine molecule enters the internal channel of the amylose helix, it may be surrounded by about six glucose residues. The following image is from reference (3): 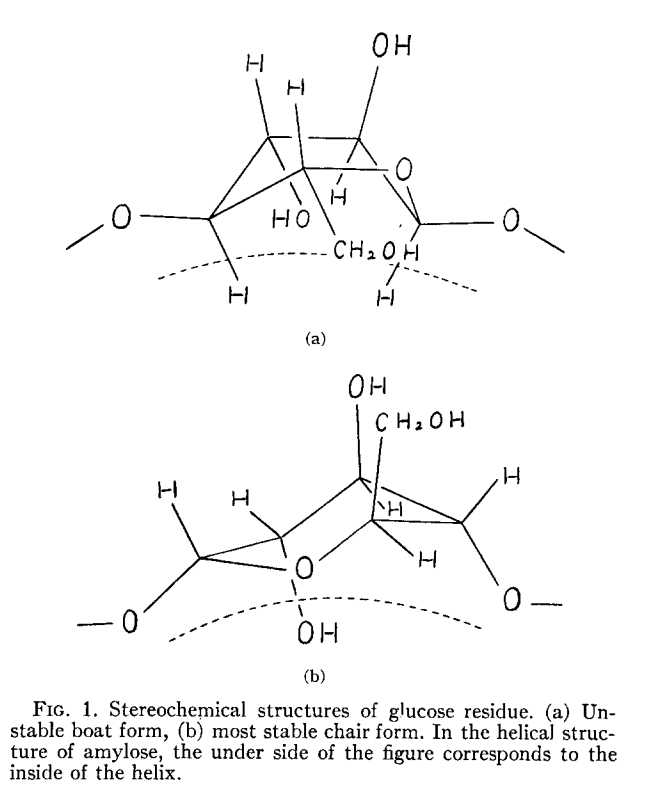 Bear this image in mind, and note that the hydroxyl oxygen is pojected into the helix cavity.

Also, when iodine is dissolved in ether or alcohol, a new strong absorption band appears in the near ultraviolet region. In relation to the study of the benzene-iodine complex, Mulliken postulated the complex formation between iodine and ether or alcohol, and explained this new band by the concept of intermolecular charge transfer spectra$^{[3]}$.

The "simple" idea behind a charge transfer complex is given below:

The iodine-donor distance is usually in 2~3 Å range. Thus, based on all of this one can conclude that possible charge transfer interactions between oxygen atoms that are projecting in towards the helical cavity and the iodine molecules in the polyiiodide chain are responsible for the colouration. You can view how the oxygen molecules are pointed towards the chain of iodine here. (I recommend rotating the diagram so that the axis of the cavity is towards you, and you are essentially looking down the tube)

Not the answer you're looking for? Browse other questions tagged polymers halides carbohydrates or ask your own question.

6
What chemical properties make some grasses usable for producing textile fabrics?
0
What the balanced chemical equation for the conversion of starch to dextrin by dry heating?
7
Can I break starch down into glucose units?
14
Why starch (amylose) and cotton (cellulose) are so different?
10
Optical activity of starch
3
Clarification in the mechanism for Molisch's test for glucose
13
Reasons for negative iodoform test