Elimination of OH from spirocyclic compounds 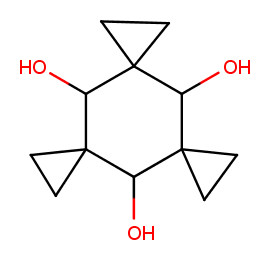 Will the double bond form? if yes then where and why? If no then what other compound will form and why?

This question has been unanswered for quite long, and meanwhile, I have found an answer, so I wanted to share it.

On treating the compound with sulfuric acid, the $\ce{OH}$ groups will be protonated to $\ce{OH_2^+}$.

As cyclopropane is under significant ring strain, it will undergo ring expansion to form cyclobutane ring, which is somewhat less strained. At the same time, $\ce{H^+}$ ions will be expelled, forming double bonds. (It should also take place step by step.)

10
What are the products of the reaction of 1-methoxycyclohexene with dilute hydrochloric acid?
7
Reaction of 1-(1-chloroethyl)-1-methylcyclobutane under E1 Conditions
5
Stereochemical outcome after elimination followed by addition
8
Decarboxylation / Elimination type reaction
7
Chirality of spirocyclic compound
6
What will be the final product when the above bridged compound is heated with concentrated sulfuric acid?
3
Hofmann elimination
11
Why does a proton prefer to attack a double bond instead of protonating an alcohol in a reaction of unsaturated alcohol with sulphuric acid?