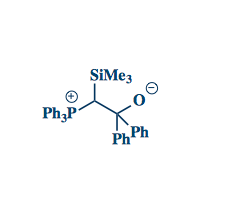 If one considers the intermediate above, there are immediately two possibilities for subsequent reaction:

1. A Wittig-type olefination which would lead to a vinyl silane: This reaction happens to be unproductive as the vinyl silane can't do any further chemistry under the reaction conditions

2. A Peterson-type olefination: Which gives a vinyl phosphine (sp.), which may further be deprotonated to give another ylid (with concomitant formation of TMSOH) which will carry on to eventually give an allene.

My question is why is the Peterson faster than the Wittig. The immediate thing that springs to mind is the difference between acid and base catalysed Peterson reactions in which the base mediated version snaps shut before the C-C bond has a chance to rotate (i.e. kinetically very fast), but this isn't an explanation.

Potentially more promising is comparing the electronegativity/positivity of the elements, and noting that silicon is significantly more electropositive and hence a better electrophile however in the Peterson, the leaving group isn't such a driving force as the phosphine oxide from the Wittig.

Seems like the silicon atom is more oxophilic as compared to the phosphorus atom. This could in principal be explained by the higher strength of the $\ce{Si-O}$ bond, as indicated by the dissociation energies $D$ (see http://www.wiredchemist.com/chemistry/data/bond_energies_lengths.html): $$\begin{array}{ccc} \hline \textbf{Bond} & \textbf{Dissociation energy / kJ mol}\mathbf{^{-1}} & \textbf{Bond length / pm} \\ \hline \ce{Si-O} & 452 & 163 \\ \ce{P-O} & 335 & 163 \\ \hline \end{array}$$ The $\ce{Si-O}$ bond is stronger thus given an explanation why the Peterson olefination is favoured. It seems that the bond lengths $r_b$ are the same, though.

You're looking for the faster rate, so given that a triphenylphosphonium (ever see a model of one of these things?) is a lot bulkier than a trimethylsilyl group, I would argue that the sterics is the main driving force behind the selectivity of this reaction.

Not the answer you're looking for? Browse other questions tagged organic-chemistry reaction-mechanism kinetics organophosphorus-compounds organosilicon-compounds or ask your own question.

31
Why does the unstabilised Wittig reaction selectively form cis alkenes?
5
How to estimate reaction products of competitive binding?
2
Wittig reaction with benzaldehyde
5
Competitive protonation between alkene and carbonyl
12
Wittig versus Corey–Chaykovsky reaction
14
Explanation of the strength of phosphorus–oxygen bond
5
Reagent choice in the formation of Wittig reagent