I recently learned about orbitals in class, and I am really confused.

I am very confused about what the orbitals look like, what the signs (such as $-2s, ---2p$ etc.) mean and how they work.

What they taught us was how there are little spaces that the electrons can fit through, because they want to get to the center of the atom, and how $2s$ is in the shape of the sphere.

But I am confused how everything is laid out. Is the "sphere" shape inside the shell and around the nucleus, or is it containing the shell. but inside another shell.

They also introduced something about the $x,y,z$ axis and I am just as confused on that too.

First thing you need to understand is that orbitals are not actual physical things that exist. Simply put, an orbital is a function that describes the probability of finding the electron with certain energy at certain distance from the nucleus. The shapes of the orbitals are just the boundaries of space where you can find the electron 90% of the time.

Electrons behave both as particles and waves. Their wave behavior is described by what is called a wave function. It has two components - radial and angular. The radial component depends on the distance from the nucleus while the angular depends on the direction. It is the angular component that shapes the orbitals. Just as it is, the wave function does not have any physical meaning, but it's square is proportional to the probability of finding the electron in a particular region of space around the nucleus.

The x, y and z axis simply refer to the Cartesian coordinate system and can describe points in 3D space. Imagine three lines where each of them is perpendicular to the other two. It doesn't matter which one you name x, y or z, this is all arbitrary.

There are four quantum numbers that describe electrons in atoms - principal, azimuthal, magnetic and spin.

The principal quantum number (n) can take integer values from 1 to infinity. It describes the different energy levels with increasing distance from the nucleus. As n gets bigger, orbitals within that "shell" also increase in size.

The azimuthal quantum number (l) can take values from 0 to n-1. It describes the type of orbital the electron resides in. It is also call angular momentum quantum number and as I've said above, the angular wave function is responsible for the shape of the orbitals. Makes sense? For each value of l, there is a different type of orbital - 0=s, 1=p, 2=d, 4=f, 5=g (not really seen occupied in the ground state of any element), and these can go on alphabetically.

The magnetic quantum number (ml) describes the direction of the orbital in space with respect to the three Cartesian axis - x, y and z. It can take values from -l to +l. For s orbital, ml can only be 0 and so there is only one s orbital that can exist for a particular principal quantum number. For p orbitals, ml can be -1, 0 and +1 and so there are three p orbitals that can exist - each along different axis - px, py and pz. The axis labeling get more complicated for d and f orbitals.

The spin quantum number (ms) can either be +1/2 or -1/2 and simply describes the direction an electron spins around its axis.

When you're filling up shells with electrons, you go from the lowest energy level to the highest and this can easily be determined by summing up n+l which would give you the relative energies of orbitals. When n+l is the same for two orbitals, the one with the lower n fills up first. One orbital can house 2 electrons which must have opposite spins. There can never be two electrons with the same four quantum numbers in a system (Pauli exclusion principle).

Sorry if I went into too much detail but if you don't understand anything please comment so that I can clarify.

What is an orbital?

According to the Oxford Dictionary of English [1], orbital is defined as

Each of the actual or potential patterns of electron density which may be formed in an atom or molecule by one or more electrons, and can be represented as a wave function.

In quantum mechanics, an atomic orbital is a mathematical function that describes the wave-like behavior of either one electron or a pair of electrons in an atom.

Each shell is subdivided into subshells, which are made up of orbitals, each of which has electrons with different angular momentum. Each orbital in a shell has a characteristic shape, and is named by a letter. They are: s, p, d, and f. (…) Within any particular shell, the energy of the orbitals depend on the angular momentum of orbitals s, p, d, and f in order of lowest to highest energy. No two orbitals have the same energy level. 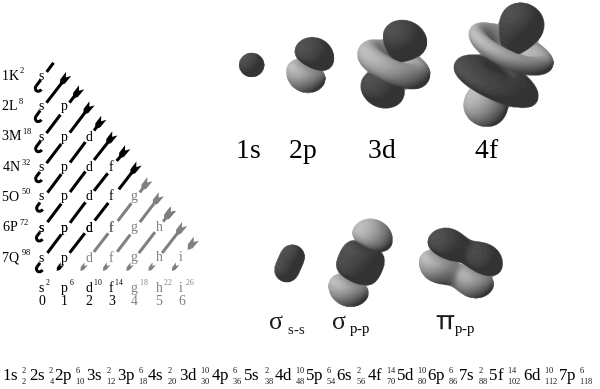 The hard part of quantum mechanics is that you can't know how everything is laid out. Elections fit into some distribution about the nucleus defined by the mathematical functions that are the orbitals. You can't practically know where they are per se, just where they are likely to be.

The traditional orbits you learn about are a gross oversimplification.

The form of the orbitals in an atom is determined by the charges and the masses of the electrons and the nucleus. The orbitals determine regions of space where an electron is most likely to be found if we make a measurement of the position of the electron. However make no mistake. The electrons in an atomic orbital can have a well-determined energy, a well-determined total angular momentum and a well-determined projection of the angular momentum on an arbitrarily chosen z-axis. It can also have a spin quantum number. But it cannot have a well-determined position. The electron in an atomic orbital has lost its particle property and has become wave-like. Its charge and mass is smeared out over the orbital and replaced by a density function given by the absolute square of the orbital mathematical function. This density function can be used to calculate the exact Coulomb potential energy of the atom. This Coulomb energy also determines the total kinetic energy (and hence the total energy) of the atom by the virial theorem.

30
How do orbitals coexist with a nucleus?
6
Why do higher orbitals have more energy?
3
Totally confused about the location of "s,p,d,f" Orbitals inside the atom
3
Why are metals conductive in terms of orbitals?
0
How do orbitals fill, what is the difference between them, and why is this stable?
0
Does the octet rule only apply to the second and third shell or does it apply further?
3
When people say "The energy of an orbital depends on its ℓ value due to screening effect" , what is screening what?
7
Why do sp³ orbitals have tetrahedral symmetry when they are linear combinations of orbitals with octahedral symmetry?