The question says "Oxygen can form compounds with every period 3 element except argon. Determine which would be ionic or covalent compounds, and draw Lewis diagrams to represent each one." I started with oxygen and fluorine and I'm having a hard time. I don't know if there should be lone pairs, double bonds, or even lone electrons.Here's my attempt at it: 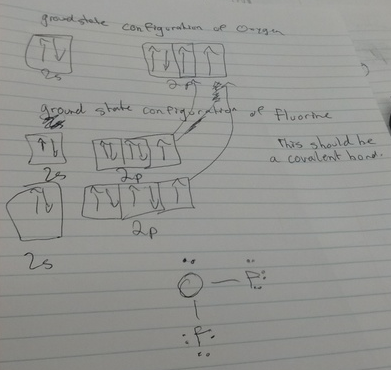 First of all, oxygen follows "the octet rule", which states that certain elements are stable when they have 8 electrons around them. Now this rule is by no means absolute, does not work with d orbitals onward, and should only be used in very elementary chemistry, unless you actually know its cause. In the case of that picture, you are missing 2 non-bonding electrons on the oxygen.

Remember that a covalent bond means that electrons are being shared by the 2 atoms. In the case of O and F, the pauling electronegativities are quite similar, so the electrons are actually "shared".

However, when you try to put oxygen together with group 1 or group 2 elements, you will find very different electronegativity values. What this means is that oxygen has much more affinity to electrons than Na or Mg. The rule I was taught at school was that a difference of 2 or more in electronegativity between the elements results in ionic compounds, meaning the oxygen "steals" the electrons, becoming a negative anion, whereas Na for example becomes a positive one.

The last guideline you should take into account, is that an atom tends to lose or gain electrons because it "likes" to have its most outer shell full. So when you look at the principal quantum number ($n$) of the most outer shell, you should create compounds where it is full. In the case of oxygen, that quantum number is $2$, which can have 8 electrons, hence the octet rule. For Na, you have 1 electron in $n=3$, so if the atom looses that electron, it will become more stable, therefore we have $\ce{Na+}$.