When is diffusion steady-state?

There is no set answer to your problem, it depends on the geometry of the diffusional process. I give two examples.

(a) Suppose there is a volatile solute in a solvent placed in a beaker and the solute evaporates from the surface, then there is a concentration gradient of solute away from the surface as the solute is lost into the air. Similarly, if there is an electrode at which ions are being deposited as a metal, or a precipitate is being formed, then a concentration gradient is set up, but as material is removed no steady state can be set up as there is a finite amount of substance present.

The depletion distance, that is the distance from the sink that the concentration is just becoming less than than $c_0$ is given by $\delta = \sqrt { \pi Dt}$ at time t.

(b) In a closed system, for example, a cell with half of it containing a solution and the other half solvent, equilibrium will become established once diffusion into all the cell is allowed. Similarly an insulated bar half of which is initially hot will effectively come to an equilibrium at the average temperature.

Consider a tube filled with solvent and then closed and some solute injected at some place, diffusion will ensure that equilibrium will eventually be reached. Because the initial distribution of concentration must level out to a constant value, the solution to Fick’s equation must have both a time dependent and a constant part.

At long times the temperature or concentration will become uniform and if $f(x)$ is the amount initially added at position x and $0 < x < L$, the long time value is the average value; $\frac{1}{L}\int _0^Lf(x)dx$ . The initial condition is given by the shape of the concentration profile $f(x)$.

The time dependent equation integrates to $c_t=e^{-Dk^2t}$ but the spatial part needs special attention to incorporate the boundary conditions.

The separation parameter k can have values of $0$, or it can be positive or positive and imaginary. Only when k is positive are the solutions non-trivial and are $c_x=a\sin (kx)+b\cos (kx)$.

The gradient boundary condition ensures that the solution is the cosine term because the derivative, $kb\sin (kx)$, is zero both at $x = 0$ and at L provided that $k=n\pi/L$, where n is an integer. 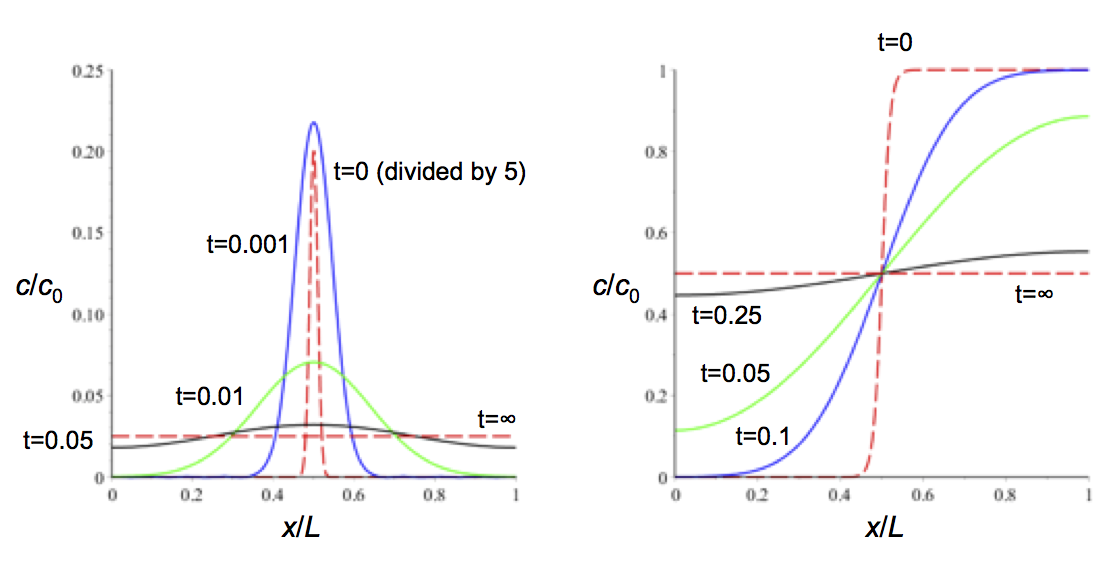 Think of the steady state as a snapshot. Fick's first law gives you the flux or rate of diffusion for this snapshot. Now, if you just let the system diffuse, it won't look the same anymore. So, either you treat it like a snapshot or you are always increasing the concentration on one side and decreasing it on the other to balance out the changes from the diffusion process. Then the picture of the system doesn't change, and it's steady state.

Not the answer you're looking for? Browse other questions tagged physical-chemistry diffusion or ask your own question.