In practice, do polar molecules actually align in an electric field?

We have all seen the following diagram (or similar) in our first chemistry class, depicting polar molecules aligned in an electric field. Is this just one of the half-truths of beginner chemistry or is this what really happens? I realize there will still be kinetic motion (spin, etc), but even statistically, is it possible for such a fluid/gas to have a net directional orientation throughout? 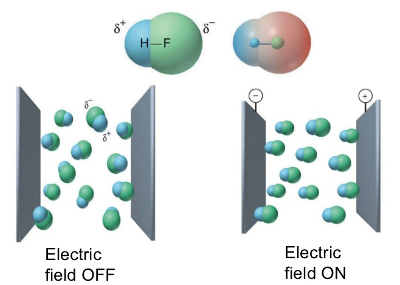 I have often seen the diagram depicted with water, but as the top answer on this question explains:

"...the ions will rush to the respective electrodes and form the so-called electric double layer. Its thickness, known as Debye length, is usually quite small. As for the rest of the solution, it will be effectively shielded from the electric field."

Perhaps this would be the same issue with hydrogen fluoride?
Is it possible the Debye length would be longer for a polar covalent molecule like Acetonitrile or Chloromethane?

If there are in fact polar molecules that exhibit this field-orientated behavior on a macro scale, what would be a way that it could be demonstrated?

These are two entirely different and unrelated phenomena, to the point that you'd better unsee that other question and my answer to it, if you can. Ions are very much not like molecules. Ions are charged; molecules are not. Molecules don't form the double layer, nor do they even know what is Debye length. The electric field (though somewhat diminished, by a factor of dielectric constant) penetrates the whole volume of liquid, so all molecules feel it the same way; none is shielded.

Yes, polar molecules get oriented in the electric field, albeit to a very tiny degree. Think of it this way: the molecule still bounces and rotates around, but it spends a little bit longer in the field-aligned orientation than in any other. To orient all molecules in a truly stiff way, like soldiers in formation, the energy of alignment has to overtake the energy of thermal motion, which requires enormous electric fields and is ultimately impossible, because a breakdown would occur way sooner than you get there.

Yes, polar molecules can align with a strong field. If the field is strong enough to overpower the local effects and the molecules are mobile. There is a devise called an ELectret, which is roughly the electrostatic equivalent of a permanent magnet. An Electret can be formed using a polar polymer or wax that is solid at room temperature. The Polymer is installed as the dielectric of a capacitor. The material is melted and a large field potential is applied to the molten dielectric. The field is maintained while the mass solidifies. Once the material is solid, it will retain a permanent electrostatic charge. The piece can be make to act much like a piezo element and is the heart of a Electret Microphone. (A type of capacitance microphone that does not require a battery to charge the capacitor.)

I believe Carnauba Wax is one material that forms Electrets. Also, polyvinylidene difluoride (PVDF) has been used. I recall the report of an experimental detonator for a torpedo that used a coil of co-axial cable rapped around the nose-cone. The cable was made with PVDF as the dielectric, and was charged as an Electret. The explosive was triggered by the charge released when the nose-cone was struck and the dielectric was distorted, changing the volume of the charge that could be contained within.

I believe that Electrets are at the heart of "Swiffers" and other types of electrostatic cleaning cloths and air filters. The static fields around the fibers would attract and hold dust.

Not the answer you're looking for? Browse other questions tagged electrochemistry covalent-compounds polarity or ask your own question.

18
Does chemistry change under high voltage?
3
Is it possible to have electric field in water without having electrolysis?
3
Placing oxygen molecule into electric field

3
Electric field effect on reactions
10
Is water stream deflecting in an electric field really based on water's polarity?
3
Is it possible to have electric field in water without having electrolysis?
1
How does a mostly non-polar molecule prevent a polar head from being pulled off by other polar molecules?
3
How can electron move between two metals without the presence of electric field?