Why isn't the side chain of arginine totally protonated at low pH?

I was wondering why arginine cannot be protonated at $\mathrm{pH\ 0}$ on all the $\ce{N}$ atoms in the side chain, as they all have a free electron pair. As this image shows, it can only be protonated once.

Why don't the other two nitrogen atoms in the side chain get protonated? Does it have something to do with resonance with the $\ce{C=N}$ double bond?

It may be hard to see from a 2D-drawing, but there are simply no more available lone pairs on arginine than the ones protonated in form $\ce{A}$.

The guanidine group ($\ce{H2N-C(=NH)-NHR}$) is isolobal to a urea group, and indeed guanidine behaves much like urea except for the common differences between $\ce{C=O}$ and $\ce{C=NH}$. The lone pairs of $\ce{-NH2}$ and of $\ce{-NHR}$ are actively taking part in resonance with the $\ce{=NH}$ group’s double bond much like an amide structure. One can equivalently say that those lone pairs are delocalised into the $\ce{C=N}$ $\pi^*$ MO. Hence, only the $\mathrm{sp^2}$ hybridised lone pair on the $\ce{=NH}$ nitrogen is basic in any way and can be protonated. 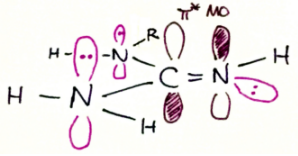 Of course, you can further protonate arginine theoretically. However, it would take superacidic media.

Not the answer you're looking for? Browse other questions tagged acid-base ph molecular-orbital-theory amino-acids or ask your own question.

23
What is Y-aromaticity? Is the trinitromethanide anion aromatic?
3
Protonation of Guanidine

1
How to explain the structure of HNO3 with a Molecular Orbital diagram?
5
Competitive protonation between alkene and carbonyl
8
Why is the thione tautomeric form of 2-Mercaptopyridine favoured?
1
Applying Henderson–Hasselbalch equation to amino acids: which pKa to use to calculate Z-/HZ ratio?
1
Which lone pairs/bonding pairs go into which pi molecular orbitals?
2
Forming the resonance structures for the nitrite anion
2
What is the charge of the amino acid lysine at pH 2?
5
Can =NH2+ in Arginine's side chain form hydrogen bonding at physiological pH?
8
Which is more basic: 1,2‐dihydropyridine or 1,4‐dihydropyridine?