I've been reading an explanation about transition states in Smith's Organic Synthesis:

This multidimensional explanation completely confounds me. Could someone explain this in a more understandable language? What is this surface with 3N-6 dimensions? How did the author use it to conclude that TS can't be observed experimentally?

The picture below shows a simple potential energy surface with a transition state at the maximum point on the reaction path, which is at the 'saddle point'.
The reaction path is the solid black line. (Oscillations in this show that the reactant and product are vibrating). The contours are at different energy with large negative being lowest. This picture is based on a calculation using known experimental parameters.

Along the reaction path the energy is as small as it can be, even though it increases as we go along, because by moving to the right or left (perpendicular to the general direction of the path) the energy is even higher. So the saddle point is just like a pass between high mountain peaks. At the highest point on the reaction path the only way to lower the energy is to go down, either to return on the original path or to continue to products. The time it takes to cross the transition state is definitely sub picosecond, < $10^{-12}$ s and possibly up to a 100 times faster.

It is not possible to visualise a multidimensional reaction path, so we have to make do with 2D plots, as below, of one reaction coordinate vs. the other with contours at different energy. In principle many similar plots could be needed for a complex reaction but very often most of the atoms in the molecule are bystanders and it possible then to only look at the separation and energy of the atoms in bonds being broken and made. 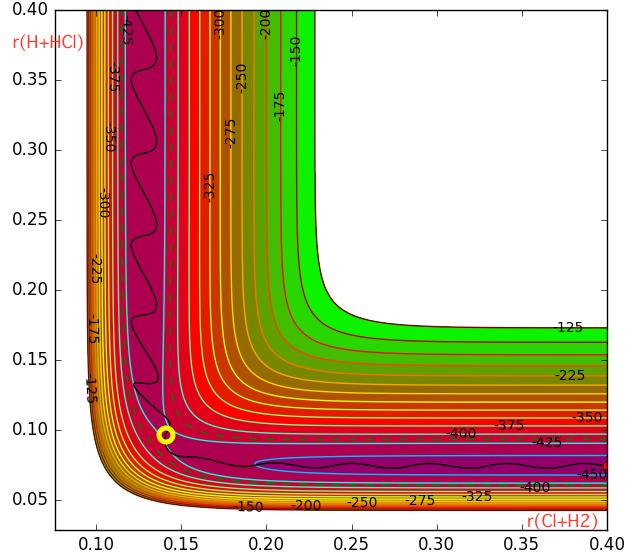 Trajectory of $\ce {Cl + H2}$ in a gas phase reaction. The H atom approaches the chlorine molecule at the right. The yellow circle shows the transition state.

First, the question may pose itself why $3N-6$ at all? And for that, we should take a step back and ask ourselves: Why $3N$?

As an example, let’s assume $N = 3$, thus $3N-6 = 3$. This allows us to keep an analogy of a three-dimensional something; you would just need to expand the thought experiment to more dimensions. Furthermore, I’m just going to say that one of the three atoms is a central one and the movement of the other atoms can be expressed as relative location to that central one. (I’m effectively ignoring a degree of freedom here, which I would like to define as vibration of the central atom towards its partners so that nothing productive can happen. It is a strech, I know.)

You can now imagine a 3D-plot where the $x$ axis is one atom’s position in arbitrary units, $y$ is the second one’s and $z$ is energy. Different arbitrary $x$ and $y$ positions, so positions of atom $1$ and $2$ lead to a different energy. Two spots of this $x,y$ grid must be minima, though: they correspond to the reactant and the product. To react, the atoms must somehow take a path across these arbitrary units from one minimum to the other.

This is now where the mountain range analogy comes in. As somebody from close to the alps, I have no problems imagining mountain ranges, valleys, summits and passes. I don’t know if people from areas as flat as pancakes would, though.

Across that path I just mentioned, there must be a transition state. This is the highest altitude you reach on your way from basin 1 (or valley 1; the reactant) to basin 2 (or valley 2; the product). Of course you need to go up and back down but is there anything else you can say about the transition state? Let’s go back to the dimensions, $x$ and $y$. Let’s assume the ‘best’ path is following a straight line abiding to $x+2y =0$. Of course, neither dimension $x$ nor $y$ tell us much about the transition state — it is a maximum along both dimensions —, however, we can mathematically transform $x$ and $y$ until one of the transformed coordinates, $p$, lines up nicely with the reaction direction and the other one, $q$, is orthogonal to it. If we express the path as functions of our new coordinates (= dimensions) $p,q$ then:

Why is it a minimum in $q$? Well, the transition state is a pass. The lowest possible spot to cross a ridge. So if you dissect the mountain range along said ridge, you can find a minimum on that ridge — this corresponds to your pass or your transition state.

What we just found out for $p$ and $q$ holds true for all $3N-6$ dimensions: when defined correctly, there is always one in which the transition state is a maximum; call it the reaction coordinate. And for all the other $3N-7$ dimensions it must be a minimum (if they are defined correctly). If it doesn’t work out of the box, ‘transform dimensions’.

9
How should I think about potential energy surfaces for reactions of complex systems?