How to set up equation for buffer reaction?

For buffer equations, how can you tell what to react with water?

For example, if I have a 1 M acetic acid solution and 1 M sodium acetate solution (a conjugate acid-base pair) mixed together and am asked to find the pH, how do I know how I should write the equation?

There is a general way to do these sorts of problems. The idea is to consider equilibria of both acid/base and of the water.

When there is solution of a weak acid and it salt, or just the weak acid or just the salt, i.e. pure HA, NaA + HA or pure NaA, then there is no distinction between these types of solution because of the equilibria involved. ( NaA just represents any salt ). The following calculations apply for each or any of these solutions.

where the concentrations are those at equilibrium.

We know the amounts of acid $c_a$ and base $c_b$ added at the start of the reaction. To obtain the pH at equilibrium the amount $\mathrm{[H^+]}$ has to be calculated. To do this work out the concentration of acid and base in terms of the initial amount and the ionised species.

The total concentration of HA is

and for the base

The e subscripts are now dropped for clarity. [Note that some authors use mass and charge balance instead to work out the concentrations.]

These values can be substituted into the equilibrium constant equation (1) and using $K_w=\mathrm{[H^+][OH^-]} $. Substitution leads to the general equation

which is a cubic equation in $\mathrm{[H^+]}$ that is best solved numerically in the most general case. This equation can be simplified under different conditions as the examples below demonstrate.

Note that when $c_b=0$ equation (2) describes the case of pure HA, when $c_a=0$ it describes the hydrolysis of pure NaA solution.

The figure shows how the pH changes for a weak acid/conjugate base with the p$K_A$ shown and $c_a$ = 0.01 M over a range of $c_b$ concentrations. The curve was calculated by numerically solving eqn 2. The straight line (coloured grey) is the Henserson-Hasselbalch equation described below in (A). It is clear where this approximate equation fails. 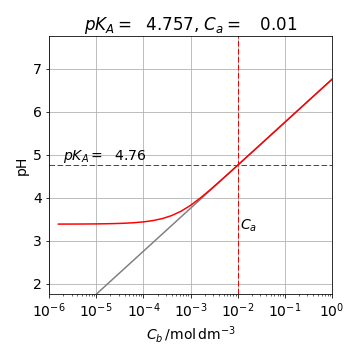 Figure 1. pH vs concentration of base $c_b$. Red line full calculation, straight line (grey) the approximate Henderson-Hasselbalch eqn. The dashed lines show the p$K_A$ and the acid concentration $c_a$ used. The region where the Henderson-Hasselbalch eq. is a good approximation is clear; $c_b$ should be no less than $\approx 0.1c_a$. The plot uses the values in example (B).

Example (A) The Henderson-Hasselbalch eqn is an approximation but limits should be tested.

which is the formula often used. The log form is called the Henderson-Hasselbalch eqn. It is often the case that $c_a/c_b=1$ then $\mathrm{pH}=\mathrm{p}K_A$.

We could use eqn. 2 but this means solving a cubic which is not necessary. Realising that in acid solution $\mathrm{[H^+] \gg [OH^-]}$ then

This equation has to be solved and not approximated to the Henderson-Hasselbalch eqn. since $\mathrm{[H^+]}$ may not be very different to $c_b$.

so the $\mathrm{pH}$ will simply be

Not the answer you're looking for? Browse other questions tagged acid-base aqueous-solution or ask your own question.

4
Am I understanding buffering capacity against strong acid/base correctly?
9
What are the limitations of the Hendersson-Hasselbalch equation?
4
Confusion regarding calculating the pH of a salt of weak acid and weak base
3
Accurate method to calculate the pH of a salt from a weak acid and weak base
2
Why does pH of a buffer solution change according to Henderson–Hasselbalch equation?
2
Are the best buffers those that are in a 1:1 ratio with its conjugate acid/base?
2
The algebraic problem in the equilibrium of weak acids and bases
2
Finding the pOH of a buffer from the scratch without the Henderson Hasselbalch equation
0
Why are some weak acid equilibrium approximations invalid in very dilute solutions?
-1
Calculate pH of a mixture of a strong base and acid. Knowing only the pH, wt/v%, and volume of both solution.
See more linked questions

10
Are all solutions of weak acid/bases buffers?
8
Can I make a buffer from two different weak acids or bases?
8
How to calculate the pH of an acetic acid/ calcium acetate buffer?
2
Buffer Systems and Ion Reaction
3
Which acid/base does a strong base/acid react when added to a buffer solution?
3
Preparation of ammonium acetate buffer for HPLC
0
Calculating the pH of a 'buffer' solution?