Pi electron stacking, how does it work?

I've come across the term base-pair stacking (with reference to B-DNA) in my school text book, and I had posted a question in that regard on Bio.SE.

I've also seen a similar (albeit brief) version of my question on Chem.SE.

I looked up the term online, and after checking out a couple of links, I'm led to believe that this term stacking refers to the forces of attraction between aromatic rings on account of the de-localized pi-electron clouds on either side of their (the aromatic rings) planes.

Now I'm not sure if I skimmed over some important details when I read up on 'stacking', but I'm unable to find a simple and solid explanation as to how these interactions are brought about.

If 'stacking' is the interaction between pi-electron clouds, then shouldn't these interactions be repulsive (on account of 'like-charges repel')? But I'm told they're attractive interactions.

But the thing thing is I'm not sure if my 'hypothesis' is correct in the present case. If this isn't what happens then I've no idea what makes 'stacking' attractive interactions.

So my question stands: How exactly does stacking give rise to attractive interactions between aromatic ring? Why don't they result in repulsive interactions?

You going along the right track. The stacking attraction occurs when two molecules with $\pi$ orbitals come face to face with one another, typically their separation is 0.34 nm. However, for the interaction to be attractive the two molecules have to be displaced slightly, this prevents direct electron repulsion between $\pi$ electrons on one molecule with those on the other. The attraction is in general between the $\pi$ electrons on one molecule and the $\sigma$ framework on the other$^1$ and vice - versa.

The model assumes that a $\pi$ orbital can be split into three charged parts, separated by a distance $\delta$. The lobes of the orbital have charge -1/2 each and at the position of the atom's nuclei is placed a charge of +1. Thus there are also three interactions $\sigma - \sigma , \pi - \sigma $ and $ \pi - \pi$ and three positions of charge, making 9 interactions in all for each atom. The interaction is taken to be electrostatic, i.e. Coulomb and each term has the form $E_{ij} = q_iq_j/r_{ij} $ for atoms i and j and is summed over all atoms.

In addition a van-der-Waals term is added to the calculation of the total interaction, this has the form $E_{vdw} = \Sigma _{ij}(A_{ij}exp(-\alpha_{ij}R_{ij})-C_{ij}/r_{ij}^r))$ where A, $\alpha$ and C have standard values$^2$. In solution the value of this energy is much reduced vs. its value in the crystal making the $\pi-\pi$ interaction the dominant one.

The charges are shown schematically below for carbon atoms. For other atoms, e.g. nitrogen the charge is given as 1.5 with 1.5 electrons associated with them. (All images are from ref 1 ) 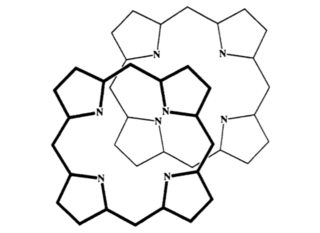 optimal geometry for Zn porphyrin $\pi-\pi$ interaction. The molecules are displaced (in x and y) relative to one another at a separation of 0.34 nm. 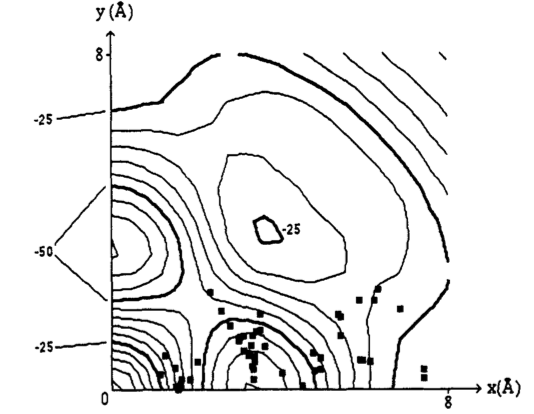 The contour plot for $\pi-\pi$ interaction and van-der-waals (vdw) energy as a function of their centre to centre offset as shown above (energies in $\pu{ kJ mol^{-1}}$). The black squares are geometries from $\pi-\pi $ stacking in crystals. The shape of the contour plot with or without the vdw interaction is the same as with just the $\pi-\pi$ interaction alone, i.e this interaction determines geometry but the vdw generally lowers the energy and more clearly show regions of low energy as negative values.

The stacking that occurs between the base pairs in the DNA double helix occurs between a "donor" base, having relatively higher electron density, and a "acceptor" base, having a relatively lower electron density. Such donor-acceptor pairs can be formed, for example between Adenine and Guanine, Adenine being the donor because of an electron donating amine group and guanine being the acceptor molecule, because of a electron withdrawing C=O group. Such interactions contribute significantly to the stability of DNA, along with the usual H bonding and London dispersive forces, as you have observed.

Not the answer you're looking for? Browse other questions tagged bond biochemistry dna-rna or ask your own question.

12
Possibility of π–π stacking in non-aromatic systems
3
Why does naphthalene have a higher melting point than both water and diphenylamine?
5
Dissociation energy of benzene dimer
2
Does ordered mesoporous carbon (for example, CMK-3) contain aromatic rings?
1
Why are Buckminsterfullerene (C60) solutions pink/purple?
1
What is the advantage of having aromaticity in biological compounds?

3
Cyclopentadiene/etc. hydrophobicity after nitrogen atom substitution at a double bond?
4
Is this a possible explanation as to why sigma bonds are stronger than pi bonds?
19
Why is an ionic bond a chemical and not a physical bond?
7
What's the bonding in the diborane(6)- hydrogen chloride dimer?
4
Why are steric effects repulsive?
4
Can two noble gases attract each other?