We know that ice has a lower density than water despite both having the same [molecular] mass. I know that as water turns to ice, it expands. As far as I was taught, I know that it has something to do with hydrogen bonding. I would like to know in terms of hydrogen bonding, why ice actually expands?

The most straightforward answer is that water in the form of ice I (or $\ce{I_h}$) has an open hexagonal structure (see figure) whereas liquid water does not. In ice the oxygens are precisely tetrahedrally positioned where each oxygen is hydrogen bonded by four neighbouring oxygens with an O..O distance of approx 0.28 nm. The H atoms lie very closely along the O-O axes. Two of the H bonds are short, as in liquid water, and two are long. This is expected from residual entropy calculations and also from thermal and neutron diffraction experiments.

Liquid water is, of course, also highly hydrogen bonded but the extra energy it contains means that its structure is far less regular and so becomes slightly denser than ice. As the water molecules can move about more in the liquid than in ice, the hydrogen bonds will bend a little or break as molecules rotate. This will lead to a shorter O - O distance and hence slightly higher density in liquid than in the solid.

see also answers to this post Why really is ice less dense than water? 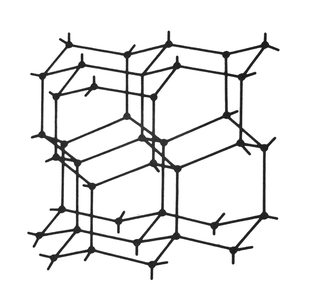 This figure shows the hexagonal ice structure; The O atoms are shown as dots and the lines are the (almost linear) O-H-O bonds.(Image from Murrell & Jenkins 'Properties of liquids & solutions')

(Ice also exhibits eight different phases depending on temperature and pressure of which $\ce{I_h}$ is the one found at normal atmospheric pressure. In these other phases, angles are distorted from being tetrahedral) 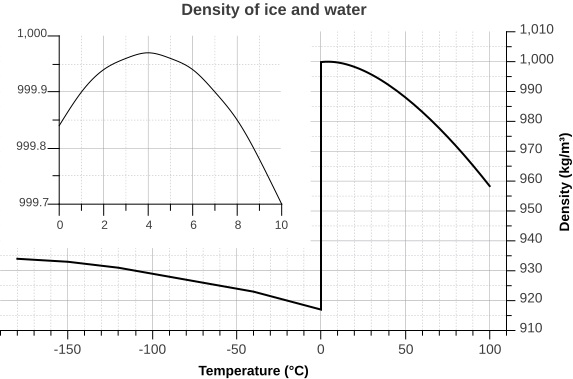 The density of water is about 1 gram per cubic centimetre (62 lb/cu ft): this relationship was originally used to define the gram. The density varies with temperature, but not linearly: as the temperature increases, the density rises to a peak at 3.98 °C (39.16 °F) and then decreases. This unusual negative thermal expansion below 4 °C (39 °F) is also observed in molten silica. Regular, hexagonal ice is also less dense than liquid water—upon freezing, the density of water decreases by about 9%.

These effects are due to the reduction of thermal motion with cooling, which allows water molecules to form more hydrogen bonds that prevent the molecules from coming close to each other. While below 4 °C the breakage of hydrogen bonds due to heating allows water molecules to pack closer despite the increase in the thermal motion (which tends to expand a liquid), above 4 °C water expands as the temperature increases. Water near the boiling point is about 4% less dense than water at 4 °C (39 °F).

Not the answer you're looking for? Browse other questions tagged water hydrogen-bond or ask your own question.

6
Why is ice less dense than water?