What exactly is the use of photographic films in cameras? How are the pictures generated?

Photographic film is a strip or sheet of transparent plastic film base coated on one side with a gelatin emulsion containing microscopically small light-sensitive silver halide crystals. The sizes and other characteristics of the crystals determine the sensitivity, contrast and resolution of the film.

But how exactly is a photographic film utilized in a camera?

I know that it has a sort of a silver coating. But how does it work? I read the Wikipedia article but found it a bit difficult to understand. 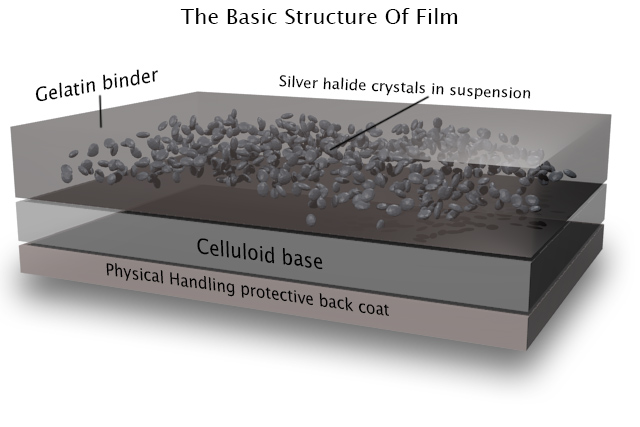 A photographic film consists of a light sensitive emulsion of fine particles (grains) of silver salts in gelatine spread on a clear celluloid strip or a glass plate.

The grain size is very important to photographers, as this affects the quality of the pictures produced.

AgBr is mainly used as the light sensitive material.

Some AgI is used in "fast" emulsions. The film is placed in a camera. When the photograph is exposed, light from the subject enters the camera and is focussed by the lens to give a sharp image on the film.

The light starts a photochemical reaction by exciting a halide ion, which loses an electron.

The electron moves in a conduction band to the surface of the grain, where it reduces a $\ce{Ag+}$ ion to metallic silver. 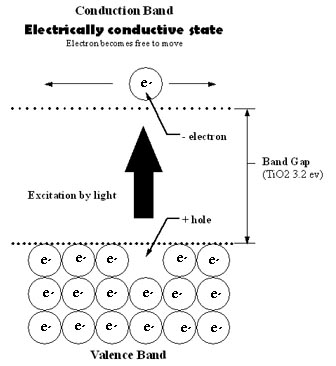 In modern photography only a short exposure of perhaps 1/100th of a second is used.

In this short time, only a few atoms of silver (perhaps 10-50) are produced in each grain exposed to light.

Parts of the film which have been exposed to the bright parts of the subject contain a lot of grains with some silver.

Parts exposed to paler parts of the subject contains a few grains with some silver, whilst parts not exposed contain none.

Thus the film contains a latent image of the subject.

However, the number of silver atoms produced is so small that the image is not visible to the eye.

Next the film is placed a developer solution. This is a mild reducing agent, usually containing quinol. Its purpose is to reduce more silver halide to $\ce{Ag}$ metal.$\ce{Ag}$ is deposited mainly where there are already some $\ce{Ag}$ atoms. Thus the developing process intensifies the latent image on the film so it becomes visible. The correct conditions for processing must be used to obtain an image of the required blackness. 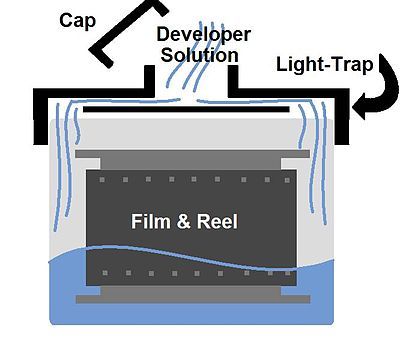 If the film was brought out into daylight at this stage, the unexposed parts of the emulsion would turn black and thus destroy the picture.

To prevent this happening any unchanged silver halides are removed by placing the film in a fixer solution.

A solution of sodium thiosulphate is used as fixer. It forms a soluble complex with silver halides.

After fixing, the film can safely be brought out into daylight. Parts blackened by silver represent the light parts of the original picture. This is therefore a negative.

To obtain an image with light and dark the right way round, a print must be made. Light is passed through the negative onto a piece of paper coated with $\ce{AgBr}$ emulsion. This is then developed and fixed in the same way as before.

In black-and-white photographic film there is usually one layer of silver halide crystals. When the exposed silver halide grains are developed, the silver halide crystals are converted to metallic silver, which blocks light and appears as the black part of the film negative. Color film has at least three sensitive layers, incorporating different combinations of sensitizing dyes. Typically the blue-sensitive layer is on top, followed by a yellow filter layer to stop any remaining blue light from affecting the layers below. Next come a green-and-blue sensitive layer, and a red-and-blue sensitive layer, which record the green and red images respectively. During development, the exposed silver halide crystals are converted to metallic silver, just as with black-and-white film. But in a color film, the by-products of the development reaction simultaneously combine with chemicals known as color couplers that are included either in the film itself or in the developer solution to form colored dyes. Because the by-products are created in direct proportion to the amount of exposure and development, the dye clouds formed are also in proportion to the exposure and development. Following development, the silver is converted back to silver halide crystals in the bleach step. It is removed from the film during the process of fixing the image on the film with a solution of ammonium thiosulfate or sodium thiosulfate (hypo or fixer).Fixing leaves behind only the formed color dyes, which combine to make up the colored visible image. Later color films, like Kodacolor II, have as many as 12 emulsion layers,with upwards of 20 different chemicals in each layer.

-1
How does Metol (4-(methylamino)phenol sulfate) react when developing black and white photos?

21
What are the chemical reactions behind fire?
3
Are there any tricks I can use to pull SO2F2 out of the air?
3
What are the product(s) of red phosphorous when burned?
0
How to use C1V1=C2V2 How do the units work?
1
Exactly how the subscripted numbers are given to the different types of boron sheets (borophenes)?